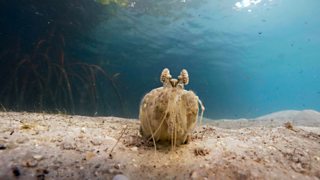 Mantis shrimp are truly spectacular predators of the marine world. Like a praying mantis, the mantis shrimp use a specialised pair of forelimbs to capture prey and are divided into the ‘spearers’, those that hunt by impaling their prey on spear like structures and the ‘smashers’ which smash their prey with powerful blows. To capture prey so effectively mantis shrimps have the most impressive eyesight in the animal kingdom. While humans have three kinds of colour-receptive cones in their eyes; the mantis shrimp has up to twelve.

The zebra mantis shrimp is the largest mantis shrimp in the world, growing over 40 cm in length and living in large underground burrows on the outskirts of mangroves forests. With burrows as close as a metre apart, they present a hidden barrier of spears for little fish that must leave the mangroves at low tide. But the social lives of mantis shrimps are complex in ways that we are only just beginning to understand, as scientist Roy Caldwell explained:

“Zebra mantis shrimps live in pairs and may remain in the same burrow for life. Hunting with their longer spears, male zebra mantis shrimp provide virtually all of the food while the female puts her efforts into raising their eggs. However, the arrangement is not fool proof... Males can be predated while hunting and without a male to feed them females risk starvation. Instead, it seems they send out some kind of distress signal, a pheromone or perhaps a low frequency call, to attract another male in, and this in turn can cause some males to abandon their smaller mate and "trade up" for the larger female. By doing so they benefit, as the larger females will lay more eggs.” 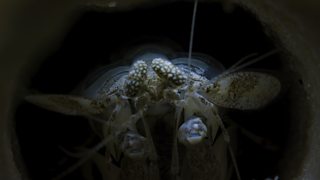 To capture the predation of the little fish, Dr Alexander Vail set out multiple remote cameras at different stages of the day and tide. To achieve the underground shots, he also reconstructed a mantis burrow in a special filming chamber.

After many weeks of trial and error, the remote, high-speed cameras stationed near to the wild mantis shrimps’ burrow finally captured extraordinary footage of the mantis shrimp striking small fish with lightning speed.