Should I wear sports clothes from natural or synthetic fabric?

We’ve probably all been told that to stay cool and dry, we should wear cotton – and yet sports shops are full of synthetic ‘technical fabrics’ designed to ‘wick away sweat’. So which is true – which fabrics will keep us fresh, dry and fragrant? 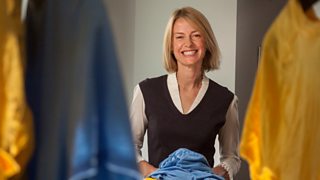 None of this sweat actually smells, but when particular bacteria living naturally on our skin feed on the fats and proteins in our apocrine sweat, they produce an odour which in some cases seems to permanently infiltrate our gym clothes.

But why do some clothes end up smelling worse than others?

To find out we gathered a group of willing volunteers and asked them to work up a sweat in two high intensity spin classes , once wearing 100% cotton t shirts, and once in 100% synthetic. On both occasions we asked them to forego deodorant in the run up the session. We swabbed their armpits so that we could study the bacteria on their skin and we collected up their t-shirts for analysis.

Firstly, the cotton t-shirts soaked up more sweat whereas the polyester fabric was drier. This is down to the different fibres involved – natural fibres tend to absorb liquids into the fibre structure, whilst synthetic fibres tend not to. This means that the water from sweat on synthetic fabric is kept near the surface and hence evaporates more easily – it doesn’t get so ‘sodden’.

But what about smell?

Interestingly, a number of studies have already looked into the ‘smelliness’ of different fabrics concluding that polyester smells worse than cotton after wear – and when we asked members of the public to smell our sweaty t-shirts many of them agreed.

So, synthetic fabrics can keep you drier – but make you smellier. Why can that be?

The job of analysing our samples fell to Prof Andrew McBain and Dr Gavin Humphreys from the University of Manchester, with the help of the Centre for Genomic Research, Liverpool. Amazingly they found up to 300 different types of bacteria in the armpits of our volunteers! Of particular interest were Corynebacteria which are known to produce unpleasant smells.

They didn’t find any significant differences in the armpits when people wore different fibres, implying that certainly after just one gym session, the fabric we wear doesn’t affect the bacteria actually on our skin.

Nor did they find differences in the types of bacteria being transferred to the fabrics FROM our skin. So it’s not that some fabrics are picking up different bacteria than others. In fact, intriguingly, they did notice that the stinky Cornynebacteria weren’t among those being transferred at all, to any fabric. This suggests that our skin bacteria may not be the main cause of the extra smells on polyester clothing, and that the problem lies in the fabric itself.

Other research seems to supports this idea. Dr Rachel McQueen, Associate Professor at the University of Alberta , compared polyester clothing to cotton and merino wool and found that not only does polyester retain more odour, but that this odour tends to increase over time. It’s thought that one of the reasons for this is to do with the way the fabrics do or don’t absorb our sweat. Because cotton is absorbent, the odorous compounds produced by bacteria (such as carboxylic acid) are trapped inside the fibres where we can’t smell them. Polyester fibres, on the other hand, don’t absorb moisture, but do attract oils, so while the moisture from our sweat evaporates, the ‘oily soils’ cling to the surface of the fibres, readily and waiting for bacteria to transform them into odour.

Another compelling discovery was made by a team of researchers in Belgium and the Netherlands including Prof Nico Boon and Dr Chris Callewaert. Their study of cotton and polyester clothing after exercise found that a bacterium called Micrococcus – which is known for its odour producing abilities – seemed to love growing on synthetic fibres, but didn’t really appear on cotton or on skin. They also tried growing up this bacterium on different fabrics and again found that it prospered on polyester. So it could be that these smelly Micorococcus bacteria that are the main cause of our stinky synthetic gym clothes.

When it comes to deciding what to wear when you exercise, it depends what you care most about: keeping dry or smelling fresh. Cotton minimises smells, but because it absorbs liquids and can get sodden, it can feel uncomfortable when you sweat. The best solution is probably to stick with synthetic clothes for their sweat-wicking capabilities, keeping you dry – and just wash them often to prevent the stinky bacteria from multiplying on them.