BBC Music Day was covered across the nations on BBC Television, Radio and Online, with special programmes, performances and activities throughout Thursday 26th September and the surrounding days. 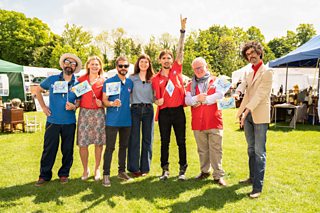 Broadcasts included a very special edition of Blue Peter, which featured Paul McCartney, details on how to get the brand new music badge designed by Ed Sheeran, and a live performance from Becky Hill. There was also a chaotic edition of Pointless Celebrities, a rock edition of Bargain Hunt featuring The Darkness and Feeder, and pop-up performances across both TV and radio, featuring Craig David, Keane, and Liam Gallagher.

Alongside these broadcasts there were over 2000 events nationwide, including for our Get Singing and Music and Dementia initiatives. See a full list of events that happened across the country here.

Find out which broadcasts featured BBC Music Day content below.