'Francis is his own worst enemy' 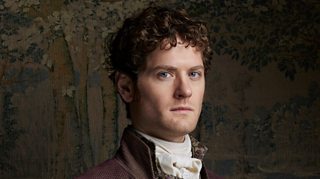 I definitely think Francis is a character that polarizes sympathy

Can you describe what it’s like being part of the Poldark phenomenon?

It is so fantastic to be part of Poldark’s success. The entire project has been great to work on and watching everybody’s hard work - on both sides of the camera - pay off has been a really special thing to watch.

What does your character, Francis, really think of his cousin Ross Poldark?

Francis really admires and looks up to Ross, but he’s also envious of Ross’ ease, confidence and disregard for social norms. Francis is very locked into how he should behave as a man of the landed gentry. I think what Francis wants most in the series is a reconciliation with Ross. He just goes about it in a really, really stupid way sometimes.

Do you think people should feel sorry for Francis?

I think people should make up their own minds about Francis. I’m not gonna tell anyone to interpret the character or his actions in a certain way. My job is to read the script, do the research and try to create a real character who reacts to each moment as truthfully as possible.

But I definitely think he's a character that polarizes sympathy. It’s difficult to understand the reasons behind his actions and even more difficult to forgive them. Francis is his own worst enemy, someone who is so stubborn and headstrong that he starts to embrace his downward spiral.

Underneath all of his impulsive, at times naive, selfish and childish behaviour lies a young man who is in pain. He is massively insecure, is effectively cuckolded by the return of Ross, has zero business acumen and has probably been told since childhood that he has to live up to the family name.

He had a rough ride in series one, what can we expect from him in series two?

Series two picks up right where series one left off, so you find Francis exactly where you left him: guilt-ridden over Ross' tragic family loss and equally guilty about snitching on him. He tries to make amends with Ross to little effect. So, the downward spiral continues…