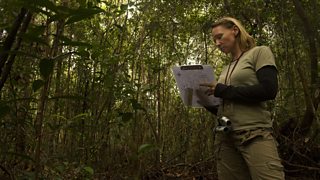 We started studying orangutans in the Sebangau forest over 20 years ago, slowly coming to know the lives of over 50 individuals by diligently following them from dawn to dusk in the dense peat-swamp forest habitat.

Uncovering the secrets of orangutans in the wild takes a long time. They live largely solitary lives and have very long life histories, as they do not reach maturity until the age of 15 and females reproduce just once every six years. While most days follow the same pattern: an early start at sun-rise, slowly moving from fruiting tree to fruiting tree to find all the food they need for them and their infant, occasionally meeting another orangutan for the briefest of interactions before making a nest to sleep in at the end of the day; every now and again they will do something that amazes you, and even something new to science! The first time we saw their self-medication behaviour was a case in point. At first we thought Indah had found a Dracaena shrub to eat the leaves from – but then we realised she was just chewing the leaves to form a paste which she spent half an hour rubbing onto her upper arms.

Later on we found out that this plant contains a powerful anti-inflammatory agent, so it seems she was treating her aches and pains – not surprising perhaps considering they spend so much of their lives hanging from branches! Since our first discovery of this behaviour we have witnessed it 2 or 3 times a year, and nearly every female in the population does it, passing the behaviour on to their offspring. Remarkably Sebangau is the only place where this behaviour has been recorded, so why is it unique to this forest? Intriguingly, indigenous Dayak people in the nearby village use the same plant for much the same reason, to treat their limbs for rheumatism and strokes, leading us to wonder who learnt the behaviour from whom, the orangutan or us? Whether there is a link or not, it’s clear we still have so much to learn.

The Borneo Nature Foundation’s earliest research identified Sebangau as home to over 6,000 orangutans, one of the largest populations in the world, and this information directly led to the Indonesian government designating the Sebangau National Park, stopping the illegal logging that had been rampant in the forest. 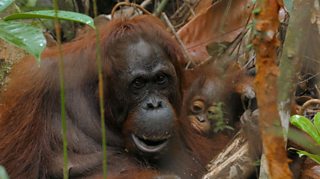 Now we wanted to know how orangutans were coping with living in a heavily logged forest, how their behaviour and ecology was affected, and crucially, whether the now-protected population was recovering after a logging-induced population crash which we had witnessed just three years earlier. Happily, the answer was yes! We have been introduced to many new babies over the past 15 years, and our wider surveys have backed this up with orangutan population density in Sebangau increasing year-on-year since protection.

Whilst our research has shown that populations can recover quite quickly in a forest protected from logging, elsewhere the picture for orangutans is not so good. Effective orangutan conservation requires effective management of lowland rainforests, but unsurprisingly these are the areas where most people live and they face the highest demand for development. The rapid conversion of lowland forests to plantation agriculture, particularly for palm oil production, is well documented.

Palm oil is so important to Indonesia’s economy (it is found in many everyday products we all use from shower gel to chocolate bars and biscuits) and boycotting it isn’t necessarily the answer – it is one of the most efficient vegetable oils and any alternative would likely require even more land to meet global demands. Instead, there are global initiatives to promote certified sustainable palm oil – produced on land which was not deforested for the purpose of planting palms – a choice that we can all make as consumers.

The future for orangutan conservation depends on maintaining as much of their range under forest cover as possible. This is not only within the protected area network, where a quarter of all orangutans live, but also forest under logging concession management, where orangutans are safe provided logging is carried out sustainably; in privately-managed Ecosystem Restoration Concessions, leased to companies for the purpose of forest conservation and restoration; in areas of High Conservation Value Forest (HCVF) set-aside within plantations; and inside the rapidly-expanding area of ‘social forestry’ – forest managed by local communities for their economic and cultural values. Combining these different ways of managing forests is the core of a landscape approach, where forest remains connected and safeguarded for the benefit of biodiversity and communities alike. 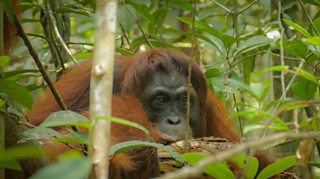 Back in Sebangau, Indah, Indy and the other orangutans live in a National Park, safe from conversion to plantations. But their forest is at risk from another pernicious threat, forest fires that spread through peatland forests during periods of drought which are becoming longer and more frequent as a result of climate change. Over half of all orangutans in Indonesian Borneo live in peat-swamp forest, with thick peat soils, laid down over thousands of years under extreme waterlogged conditions. But loggers and land developers have dug canals which drain the peat, which then burns readily when fires spread in from neighbouring farmland. The habitat of over 10,000 orangutans is estimated to have been lost to fire in the past decade. To counter this, the Borneo Nature Foundation is working with the National Park and other local partners to restore this critical peatland habitat, blocking the drainage canals, embarking on a one million tree campaign to reforest burnt areas and protect against future fires, and supporting five community fire-fighting teams. Formed of committed people from the local villages, joined by our research assistants, these teams work tirelessly during the dry season, often putting themselves in harms way to prevent the fires spreading into the forest. They are true conservation heroes, and because of their efforts the orangutans of Sebangau continue to live their secretive lives in the depths of the jungle.