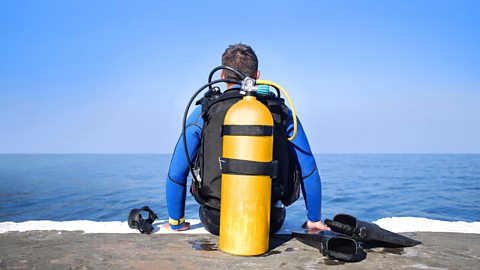 What are SCUBA and LASER acronyms for?

Chris Evans and the rest of the Radio 2 Breakfast Show team had their minds blown this morning with the revelation that the words "scuba" and "laser" are actually acronyms. "We had no idea!" said Chris.

An acronym, for those who have forgotten, is a word comprised from the initial components or letters in a phrase. This etymological bombshell set Radio 2 to wondering - just how many other words in common English usage began life as acronyms? The answer, it transpires, is quite a few.

Read on to find out more, and expand your word-based pub quiz knowledge forever...

Everyone loves a good laser, particularly in the context of a James Bond film - after all, who could ever forget the famous 'laser crotch' nail biting moment in Goldfinger? What's more, they make festivals look AMAZING, and they're also pretty important when it comes to such life-changing scientific advances as laser eye surgery.

But while the word is familiar to us, not many people realise that "laser" is actually an acronym for "Light Amplification by Stimulated Emission of Radiation." Just wow!

Many of those who have been lucky enough to explore the colourful and wonderful world of scuba diving don't actually realise that what they're using to breath underwater is actually named for an acronym.

"Scuba" stands for "Self-Contained Underwater Breathing Apparatus" - which does exactly what it says on the tin!

Radar, an object-detection system that uses radio waves to locate and analyse objects, was invented by a Scottish scientist called Robert Watson-Watt in 1935, and developed by various countries in the lead-up to the Second World War.

The term "Radar" itself was coined in 1940 by the United States Navy, as an acronym for "RAdio Detection And Ranging."

Radar is pretty special - an MRI scan uses a form of radar to look inside the human body, while NASA used it to calculate the distance between the earth and other planets. Turns out it has a special name, too!

Oh where oh where would we be in modern life without gifs? How else could we set up THE BEST Twitter jokes, or wordlessly convey our feelings in an email?

But while the boom in the popularity of gifs feels like quite a recent thing, they are actually 30 years old - and their name is also an acronym. American computer scientist Steve Wilhite created the “graphics interchange format,” or gif, in 1987.

While the word "taser" sounds a bit like someone made it up because it sounded rather sci fi, there's actually an interesting acronym-related story behind the electric shock weapon's name.

The word actually stands for "Thomas A Swift Electric Rifle", after the inventor, Jack Cover, decided in 1974 to name it after his favorite children’s book character - Tom Swift.

When your friend is poorly and you send them some chocolate and mags, you might call that a "care package" - after all, you're showing someone how much you care. But the origins of the phrase are less simplistic than they first appear.

Care packages were originally known as "CARE packages," and they were sent from the US to loved ones via the Cooperative for American Remittances to Europe following the Second World War. The group eventually changed its name to Cooperative for Assistance and Relief Everywhere, as they began to broaden out their charitable reach. The term "care package" slipped into common parlance, and it's been there ever since.

In the heady all-mod-cons days of 2017, we tend to use "spam" to refer to all the junk mail that weasels its way into our email inboxes. But let's not forget that "Spam" was, of course, originally more widely known as the name of a tinned meat product (others are, of course, available.)

While the origins of the name are, curiously enough, shrouded in secrecy, it is thought to be an acronym of either "Special Processed American Meat" or even just, "SPiced HAM." The answer is only known by a small circle of 1930s food executives. Either way, the product was originally produced in 1937 and became very popular during World War Two and in the years of rationing afterwards. The seven BILLIONTH can of the stuff was reportedly sold back in 2007.

A classic 1970 Monty Python sketch, set in a cafe where tinned meat is pretty much the only thing on the menu and relentlessly promoted, is acknowledged to have inspired the modern understanding of the word "spam" as the term for unsolicited electronic communication.