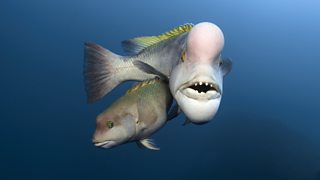 We wanted to tell a story of seasonal change in One Ocean and to show how small changes in temperature can have a big influence on marine life in the seasonal seas. Around the same time our team had shown me images of a full-grown male kobudai and I remember looking at the images with my series producer, Mark Brownlow and us both wondering “it is an incredible and unusual fish, but does it do anything?”

Our team then began to investigate and discovered that a rise in sea temperature triggers the males to engage in territorial battles over the right to spawn, and more interestingly, that all the big males that fight were once females.

Having studied marine biology it was no surprise to me that kobudai change their sex. After all it is a member of the wrasse family who are well known to exhibit sequential hermaphroditism, meaning that for them sex change at some point in their life is a normal biological process generally to aid reproductive success. In fact, sex change is a very common reproductive strategy in many fish. Some, like the wrasse tend to change from female to male whereas others, such as clownfish tend to change from male to female and some fish species, it’s thought, can potentially switch sex multiple times.

Actually filming the story of a sex changing fish would prove to be a great challenge in itself. We sent a small team on location to Japan in 2016 to work with a Japanese underwater film crew but discovered that it was very hard to get close to the kobudai on SCUBA. So we returned the following year with rebreathers, an underwater breathing apparatus which produces far less bubbles and noise, and that allowed the team to spend longer underwater and to get far closer to this extraordinary fish. 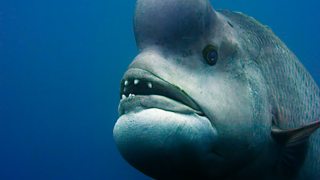 It takes months for an individual kobudai female to turn into a male and it would have been impossible to follow the same individual through the entire process. Instead, by filming multiple individuals at different stages, over two seasons of observation, we were able to reveal the entire story of the incredible transformation as a female changes sex to become a male. Indeed cameraman Roger Munns managed to film the male that had been dominant the previous year, this time losing out to a new male. So, after two years of endeavour we could finally portray the full story of the kobudai – monstrous looking may be - but with a surprisingly common reproductive strategy.