Holidays closer to home are on the agenda for many British holidaymakers this year – but where to go and what to do? As two of the UK's best-loved comics, Bob Mortimer and Paul Whitehouse, are back on our screens exploring some of the most beautiful fishing locations in Britain and causing gentle havoc wherever they go, we've asked them to share some of their favourite scenic spots.

The Lower Wye in Herefordshire is a prime place to fish for chub, and Bob's favourite spot from this series.

“It’s the most unexpected landscape I think that you can find in the UK,” he says. “There’s this huge British Columbia/Montana style river just on our doorstep, and I would happily just sit on the banks and not fish, and stare at my surroundings for hours. Luckily, we were fishing and we had a great day. I made Paul the worst cup of tea that has ever been brewed there – I was quite proud of that. The Wye stands out as probably our most successful fishing expedition. The weather was amazing, the location was amazing.”

2. Bemersyde on the Tweed, Scotland

Recognised as one of the great salmon rivers of the UK, the River Tweed flows east across the Border region and northern England. 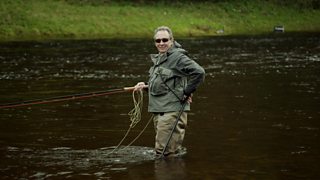 Paul loves it. “I’ve never fished on the River Tweed before. It was an absolutely beautiful day, and we emerged from this little forest into a clearing, the sun came out, the river was at a perfect height,” he says. “For me nothing beats going down to fish for a salmon in a river that looks so full of promise.”

And Bob couldn't agree more: “We have to be more grateful for this stuff. See what I mean about Mother Nature being the best artist – I mean look at it!”

Sometimes, nostalgic spots are the best. “This the river I used to fish as a kid, where I caught my first roach with my father!” Paul says. 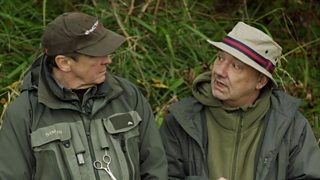 The river starts in the Chiltern Hills and heads southeast through Hertfordshire to London where it joins the Thames as a major tributary. “It's just a lovely spot, isn't it?” Bob says.

Parts of the Lea have some of the most pristine water on the planet, taking up to about 60 years to be filtered through chalk, which makes it an ideal place to fish.

“Look at it! How glorious!” exclaims Paul, as the pair fish for pike in the Fen lakes of the Norfolk broads. The lakes, also known as broads, were formed by the flooding of peat workings.

Not only are they wonderfully calm and relaxing places to be, Broad Fen and Smallburgh Fen have also been designated as Sites of Special Scientific Interest (SSSIs) as part of the Broadland site north-east of Norwich. The Fens are spring-fed, flow into the River Ant and are home to various rare species.

Norfolk was also the location of Paul and Bob's 'magnificent athleticism on the beach.' "I challenge Paul to a beach race," Bob says, "I'm not going to say who wins. But it’s an interesting result..."

Paul and Bob went fly fishing for brown trout in the River Test after the angling ban was lifted during the Covid-19 lockdown, and it was the first time they had fished this summer.

They both agreed: “It's quite simply stunning”.

The River Test is 40 miles long, and the chalk stream is regarded as having some of the richest fauna and flora of any lowland river in England. And the perfect place to have a picnic on the banks looking over the water.

Although privately run, this is a spectacular spot of beautiful gravel pit lakes in the village of Great Somerford just outside Malmesbury. The 12 acres of water is open to members to fish all year around.

This series' locations have made an impression on the pair: “We love all our locations! They are all as spectacular as the next,” says Paul.

Are you tempted to head out with your fishing rod? The duo have one last tip for you: “A day spent fishing is never a day wasted... you might have a non-productive day in terms of fish – but it’s never a bad day wherever you are” says Paul. We couldn't agree more.

Mortimer & Whitehouse: Gone Fishing is on BBC iPlayer and on BBC Two on Sundays at 8pm.