Join #MuseumPassion for a week-long celebration across the BBC

#MuseumPassion is a week-long celebration across the BBC's TV, Radio and Digital outlets. One of many highlights is on Thursday 15 October, as BBC Arts brings the UK's fantastic museums to a global audience with a full day of live events. Brand-new acquisitions and archival delights await...

#MuseumPassion highlights the best of UK museums and galleries from 8-16 October 2020, in partnership with the Museums Association, Art Fund and the National Museum Directors' Council (NMDC).

As part of of our week-long #MuseumPassion celebration, BBC Arts devotes a full day to bringing the UK's incredible museums to a global online audience. Your guides for the day are Dan Vo and Sacha Coward, freelance consultants with a passion for museums, who talk to museum directors and fire up York Museum's famous Curator Battles. They will feature on our dedicated Live Page at 10:30, 13:45 and 16:00.

Use #MuseumPassion on social media - we are featuring brilliant and fascinating museum stories here on 15 October from 10:00-17:00.

Four special-access visits to the collections of museums and galleries across the United Kingdom during the Covid-19 pandemic.

Arts enthusiast Cerys Matthews is given an ‘access-all-areas’ pass to her favourite museum, St Fagans National Museum of History in Cardiff, winner of Museum of the Year 2019 and home to extensive collections and historic buildings.

In its early 20th century miners’ cottages, Cerys discovers how a previous generation coped with the 1918 Spanish Flu pandemic. Did close-knit community life help, or were there drawbacks?

Dublin-born social historian Emma Dabiri admits that travel is in her blood. Now, as leaving the country becomes increasingly fraught in the global pandemic, she finds a new way of seeing the world through selected artworks at Ulster Museum in Northern Ireland's capital, Belfast.

Emma examines how artists brought their vision of the world to the UK, and metaphorically transported art lovers across continents before the invention of the jet engine.

Artist Lachlan Goudie visits the Scottish National Gallery in Edinburgh to revisit a collection he describes as being part of his family.

Lachlan grew up with the artworks in the gallery and now considers how these paintings, which were created more than a hundred years ago, have such relevance to the challenges we are all living through today, because of Covid-19, in terms of family, friendship, community, wildlife, nature and hope.

A chance to explore the National Gallery's critically acclaimed show that very nearly never happened due to Covid-19 restrictions. Artemisia Gentileschi’s blockbuster exhibition is billed as Tarantino meets Caravaggio, a bloody tale of tragedy and triumph with a twist.

Has there ever been a better, bolder painter of human drama?
Will Gompertz on Gentileschi

Artemisia was a woman who painted her way to fame and glory in 17th-century Italy but was then forgotten for centuries. But not simply a painter who deserves to be rediscovered for her defiance of an age that was unapologetically biased against women. She is a truly great artist whose achievement has been obscured by lazy sexism. 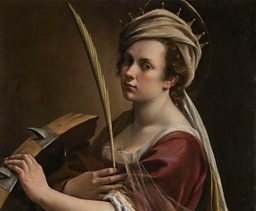 Self Portrait as Saint Catherine of Alexandria by Artemisia Gentileschi (1593–1654 or after) | The National Gallery, London | Art UK

The Frieze-BBC Radio 3 Debate: Museums in the 21st Century

Free Thinking, in collaboration with Frieze Art Fair, hosts a panel of cultural leaders for an international debate on how galleries and museums are responding to the significant challenges of 2020. Directors of the Hermitage, the National Gallery of Art in Washington and the National Gallery, Singapore discuss the challenges of running a museum, and the debate is hosted by Anne McElvoy.

On Breakfast, five curators of museums from across the nation each bring to life a favourite object from their collections, explaining the significance it held to the people of its time. Their spoken portrait is complemented by a related piece of classical music.

Playing her part in the #MuseumPassion season, Mary Beard examines what the future holds for museums, and ventures out of her study to the British Museum. On her first visit since she was made a trustee, she gets to work taking miniature medieval masterpieces, the Lewis Chessmen, out of their lockdown storage. Mary also surprises the first visitors on opening day as she takes on the role of museum guide.

And, to round off, Mary debates with V&A East’s Gus Casely-Hayford and sociologist Tiffany Jenkins on how best to respond to a world that has changed beyond recognition.

Grayson Perry takes to The One Show sofa to reveal the winners of the prestigious Art Fund Museum Of The Year, which celebrates exceptional museums and galleries and is the biggest museum prize in the world. Grayson then hot-foots over to Jo Whiley's studio to chat about the winners on BBC Radio 2. There is plenty to discuss, as Jo is herself a former Museum of the Year judge.

Front Row will talk to the Art Fund Museum of the Year winners on Monday and will feature a museum each day that week, following the announcement.

The BBC has supported museums this year with a wide selection of fantastic programming. From Art Deco to The Clash, Rembrandt to Warhol, Tate Britain to Titian, watch a collection of museum film highlights.

Art Deco By The Sea - The Exhibition

More from our amazing museums