The chameleon is well known as a master of disguise, but that is not the only fascinating aspect of these wonderful animals. Here are nine things you might not know about them…

1. There’s a story that the chameleon looks so bizarre because it was made by the Devil from spare parts.

It is said to have the tail of a monkey, the skin of a crocodile, the tongue of a toad, the horns of a rhinoceros and the eyes of a who knows what?! 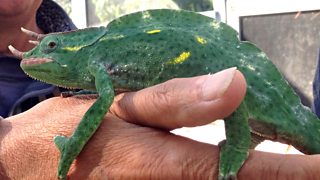 2. Disguise is not the only reason chameleons change colour.

They become darker when it’s cold to better absorb heat and they become lighter to reflect warmth when they need to cool down.

Colour can also be a sign of their mood and chameleons often show their most striking colours when they are communicating with other chameleons. This allows them to communicate over long distances without making sounds that could alert predators.

The brightest colours are displayed when males are trying to impress females or when they feel under threat from other chameleons. 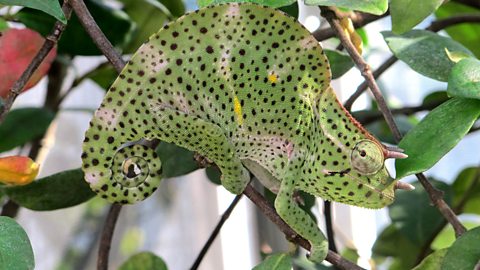 Spot the difference: see how quickly this chameleon changes

In a few seconds, a young Jackson's chameleon produces spots.

3. A chameleon’s tongue is twice the length of its body on average.

Most of the time it is folded up like an accordion in its mouth. When a meal passes by, the chameleon contracts its tongue muscles just like pulling back the string of a bow and fires its tongue forward like a rocket-powered harpoon, reaching its prey in 20 milliseconds. Scientists call this adaptation "elastic recall".

If it were a car, a chameleon's tongue could accelerate from 0 to 60 miles per hour in 1/100th of a second. It's the highest acceleration and power output of all reptiles, birds and mammals.

A chameleon’s tongue in action

4. The world’s smallest chameleon is the Brookesia micra which grows to just 30mm. 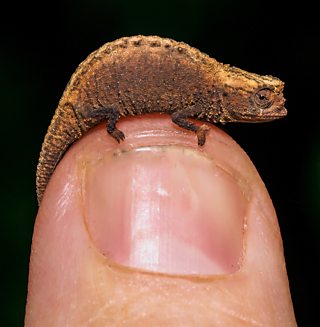 It is one of the tiniest vertebrates on earth.

The largest chameleon is the Parson’s chameleon which can reach up to 68cm. These enormous lizards have ridges running from above the eyes to the nose forming two warty horns.

5. Chameleons have the most unusual eyes of any reptile.

Each eye can rotate independently to observe two different scenes separately and they combine these two images in their brains. This allows chameleons to see a 360 degrees arc.

6. Chameleons change colour by moving pigment cells so that they overlap one another.

Until recently, this method – which is similar to mixing paint – was thought to explain how they display all their colours. But research has shown that some of the brightest colours appear when pigment cells with miniature crystals are moved in order to reflect different wavelengths – and therefore colours – of light.

7. For centuries there was a myth that chameleons could live on air.

This was supposedly because people so rarely saw them eat.

To test the theory, chameleons were put in cages without food. Needless to say, the experiment didn’t go well for the chameleons, as you will hear in Natural Histories: Chameleon.

8. The chameleon is thought to be responsible for humans being mortal.

The Zulu of Southern Africa believe that the chameleon was told by God (Unkulunkulu) to send a message to humans to tell them that they could live forever. The chameleon set off but, due to its slow gait the, it took so long to get here that God changed his mind and instead sent a lizard to break the news that his people could die. People blame the chameleon for this and it is seen as an omen of bad luck in many areas.

9. Throughout his life and in nearly all the tributes to him after his death, David Bowie was described as a 'musical chameleon'.

... But he didn’t agree with the description and said: “For me a chameleon is something that disguises itself to look as much like its environment as possible. I always thought I did the exact opposite of that.” Hopefully at some point a reptile expert pointed out that the chameleon shows its most dazzling colours when it is displaying to others so there is flamboyance in the chameleon’s colours, as well as it being the Houdini of the animal world.