Fire, whisky and wolves — how to survive a night in a Scottish mountain bothy

Most mountain bothies are in remote locations.

Reaching them can be a challenging experience, especially with the added complication of having to cart in materials for repairs and renovation. We could certainly sympathise with the volunteers as we lugged tripods, cameras and lights across mountains, bogs and icy burns.

The bothy at Strathchailleach was one we were particularly excited about visiting. It’s situated in an expanse of moorland known as The Parph only a few miles south of Cape Wrath and miles from the nearest village.

Bob looks after the building. We met him halfway down the track to Sandwood Bay — a spectacular location for a rendezvous. Bob was carrying two chairs on his back. Everything has to be carried in this way; there is no access by jeep or quad bike. 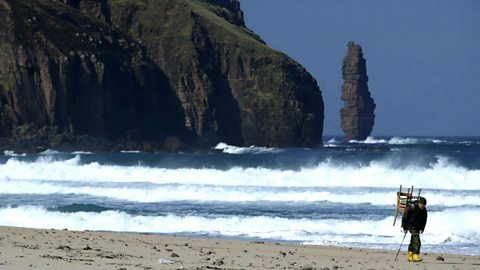 Strathchailleach bothy is a magical place with an intriguing history.

Bob paints himself as being content in his own company, but as the evening wore on his misanthropic mask started to slip. He spoke with great affection of the people he had met in the bothy and in his travels across Scotland. He told us that in any bothy the main topics of argument are:-

The last point was particularly relevant as this area was described by 17th century mapmakers as being ‘infested with wolves’. Luckily there was no disagreement between the film crew and the interviewee on any of the three topics.

We went to bed with our imaginations spinning. After being woken by the rain hammering on the roof in the middle of the night, I ventured out to the loo, fearful of a rough hand on my shoulder. Coming back I avoided looking at the window in case Sandy’s face was there, his trusty axe in hand.

The next day we were sad to leave. Bob was up early to cart a huge bag to the bothy at Strathan and then come back to treat Strathchailleach for woodworm. His energy put us to shame.

We left him a note in the bothy and headed back to Kinlochbervie. There was fresh snow on Foinaven and soon the wind and hail thrashed across the road..

Extracts from the programme

For many years until 1994, it was home to a hermit called Sandy: a lovable rogue to some; a menace and ‘bothy thief’ to others.

In 1981, a deal was struck with the MBA which meant he could live in one half of the cottage while the other half was used as an open bothy.

Various reports suggest he didn’t stick to his side of the bargain and travellers hoping to find shelter from the weather would risk being greeted by an angry axe-wielding face at the window.

Inside the bothy it’s clear that Sandy’s spirit is still present. His paintings adorn the walls and his photograph is given pride of place in the main room. 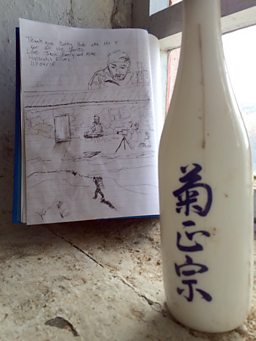 The thank you note left in the Strathchailleach bothy book 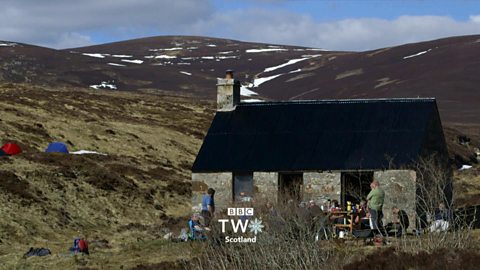 Documentary telling the story of the Mountain Bothy Association