Snares penguin parents take it in turns to look after their young.

The Snares islands are the holy grail of New Zealand wildlife destinations- they were never settled by humans and miraculously have never been invaded by introduced mammals of any kind. It is a Lilliput kingdom of gnarly trees and is ruled by an empire of woodland penguins that breed in clearings. There are dozens of colonies all linked up by well-worn paths and muddy little roads, creating what amounts to a labyrinthine penguin city in the ferny forest. It was this unique spectacle we hoped to film.

I felt like Gulliver on his travels. It all started with an adventurous sea crossing in a small yacht across the wild Southern Ocean. I’m an avid fan of reading of adventures on the high seas, but it’s quite something to find yourself doing it all for real, especially if the only sailing you have ever done is in a book! I vividly remember losing the sight of land for the first time and finding myself in the company of enormous rolling ocean swells, and much to my eye-boggled excitement, my first albatross.

You can see why they inspired sailors. They are like enormously elegant sea gulls with stretched wings, which seem to impersonate angels as they skim the ocean surface with an ethereal gravity-defying grace. I watched them, fascinated for hours.

Mooring a boat at the Snares is fraught; the cluster of islands rise out of the sea like castles with rocky ramparts, open to the wild seas. If the wind and currents are in your favour then there is one sheltered cove you can get access to, and we got lucky. New Zealand is famous for having weather, which can be four seasons in one day, and we arrived to find ourselves in the midst of an unprecedented sub-Antarctic heat wave.

Snares penguins have carved out a labyrinth of well-trodden paths through the forest to their nest site.

When you approach a city it’s often the sound and smells which hit you, motorways or dual carriageways packed with dense traffic channel your approach. This was just the same, except the commuters were all knee height and wearing the same uniform. After arriving in packs, sleek and wet from the ocean, the rather serious crowd followed well-worn paths up the rocks and into the forested interior.

The first thing that hits you is the sound - the pitter-patter of hundreds of tiny feet as lines of penguins jostle along...

All around us were hundreds of wild animals who were all completely trusting, which meant we could film them in an incredibly intimate way. Swept along by the diminutive crowd, and given the odd beady stare, we found ourselves approaching the heart of the island. The forest canopy is low and tightly packed like a dome built of broccoli heads. The trees, which look like dwarf weathered oaks, bizarrely enough belong to the daisy family.

The first thing that hits you is the sound - the pitter-patter of hundreds of tiny feet as lines of penguins jostle along what looked like busy urban penguin streets. There was even what looked like a town square where several penguin roads converged. Slanting golden sunlight illuminated the scene as a startled grunt beside me came from an indignant penguin perching in a tree! Both cameraman Mark MacEwen and I had journeyed with trepidation to the island, but the sight before us made it all worthwhile. We sat down on a beautiful fallen “daisy” log and marvelled at the scene. This was a surviving pocket of New Zealand’s original kingdom of birds, in all its pomp and glory. 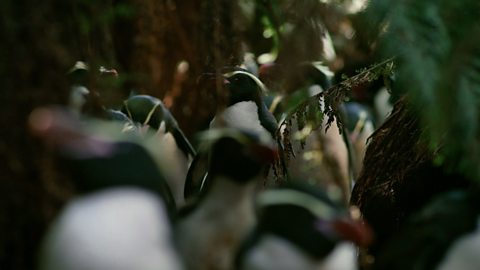 Penguins find their way home... in a rainforest

The rainforests of Stewart Island are home to a unique colony of penguins.