Twenty-seven years since his death, the ideas Andy Warhol filtered through his work have now become so prevalent as to be almost invisible. He took the mass market – Campbell's soup cans and Brillo pad boxes – and made them into his fine art, which itself became mass market.

Warhol's concept of 15 minutes of fame (for which photographer Nat Finkelstein also claims authorship) is now seen to be so mundanely true as to be barely worth mentioning. But what unifies many of his ideas is that they are endlessly fascinating reflections on modern life.

Warhol voraciously mirrored the world around him – its stars, its horrors, its gaudy creations, often deploying the easiest or cheapest of means to do so: screen prints, photographs, illustrations, magazines, film, video.

Tate Liverpool's exhibition in late 2014, Transmitting Andy Warhol, was a timely reminder of the breadth of the pop artist's remarkable output and how Warhol exploited all the means of expression open to him.

The original version of this article was published in November 2014, to accompany the opening of the exhibition. 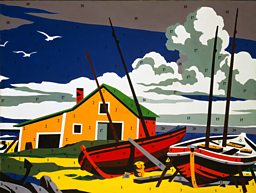