Six ways you learned about Wagner's Ring Cycle without even noticing

The original fantasy boxset comes to Radio 3 and BBC Sounds in February 2021 in a dramatic Royal Opera House staging.

The Ring of the Nibelung (AKA "Der Ring des Nibelungen", AKA the "Ring Cycle") is a series of four epic – and we mean epic – operas by Richard Wagner, who took somewhere in the region of 26 years to write them. The composer presided over their first complete performance in his custom-built Bayreuth Festival opera house in 1876. It took four days.

It’s hard to overestimate how profound the impact of The Ring was in its time. Even now, the operas remain famous for their scale and complexity, and for the demands they make on the stamina of both singers and audience. Running all four operas back-to-back takes around 15 hours.

So where do you start with the Ring Cycle – and what if we told you that you probably already have? From poetry to film via fantasy box sets, here’s your guide to how Wagner’s Ring Cycle has left an indelible mark on Western culture.

The Ride of the Valkyries is probably the second best known of all Wagner’s works after Lohengrin’s Bridal Chorus (aka "Here Comes The Bride"). Made famous by the 1979 film Apocalypse Now, it’s the triumphant-sounding music that plays from helicopter speakers as a squadron of hyped-up American soldiers rains destruction on a Vietnamese village. 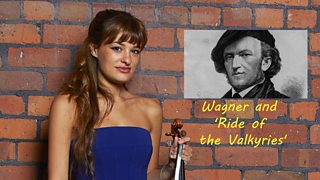 In opera world, Ride of the Valkyries comes at the beginning of Act 3 of Die Walküre, the second of the four operas that make up the Ring Cycle. It accompanies the entrance of the Valkyries, a mythological race of females who decide the fates of warriors and transport the souls of the dead to Valhalla. See below.

Whether your associations are with opera or Hollywood, there’s no denying the music’s energy and excitement. We’ve always thought it would make quite a good alarm call.

Click on the audio flag to listen to top violinist Nicola Benedetti's Ten Facts about Richard Wagner and "Ride of the Valkyries".

For many people, the very concept of an operatic soprano will forever be linked to the mental image of a fierce, full-figured female wearing a feathered helmet and brandishing a spear. That’s Wagner’s fault, and tragically, there’s not much that actual sopranos can do about this popular misconception, except for avoiding hats with feathers.

These ladies appear a lot in the Norse mythology that influenced the Ring Cycle, none so much as the shieldmaiden Brünnhilde, who heads up Wagner's fearsome bevy of soul couriers. By and large, her team’s job is to tell warriors about their impending demise, then cart them off to Valhalla when, inevitably, they end up getting stabbed to death.

Nevertheless, Brünnhilde gets into a spot of bother when she rocks up in Act 3 of Die Walküre with a fully alive woman in her saddlebag instead of the dead warrior her father and colleagues were expecting. Because Valkyries also use their (presumably rather capacious) bags to store dead heroes. This is a good way of telling them apart from operatic sopranos, who mostly use their bags to store Evian, pencils, throat lozenges and bling.

The more fantasy fiction you consume, the more you realise the seismic magnitude of the Ring Cycle's influence on Western culture. Game of Thrones is just the latest example of a Ring baby.

Quite apart from the shared themes of dragons, dwarfs, gold, war, twincest, insanely complex family trees and the abrupt deaths of all the characters you were just starting to get fond of, there’s also the sheer ruddy length of it all to consider. Classic Ring Cycle. 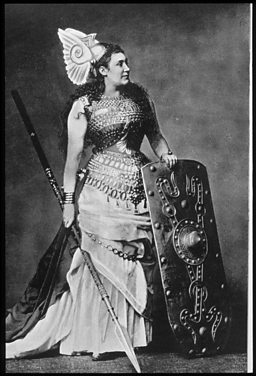 Lord of the Rings

If you’re thinking, "Blimey, this all sounds a bit LOTR", you would be 100 per cent correct. Would Frodo have embarked on his frankly tiresome journey to Mount Doom without Wagner? Officially, the jury’s out, but it seems unlikely. The similarities between Tolkien's and Wagner’s respective works are pretty much in-your-face: the dwarves, the dragons, the magical swords, the sheer epic fightiness of it all… and of course, the Rings.

Don’t go thinking that the Ring Cycle is some Lord of the Rings: The Musical, because it isn’t.

Tolkien started writing his Lord of the Rings novels some 64 years after Wagner polished off Götterdämmerung. He always claimed that he hadn’t been directly influenced by The Ring. In fact, as an academic who specialised in the Nordic and Norse mythology that influenced both works, he was even a bit sniffy about the way Wagner interpreted their shared source material.

Nevertheless, the fact is that Lord of the Rings and the Ring Cycle share bits of plot that just aren’t present in the original sagas. For example, both the Ring of the Nibelungs and Tolkien’s The One Ring possess corrupting powers and the ability to give the wearer control over others, while the rings in the Völsunga and Nibelungenlied sagas don’t. Despite Tolkien’s protestations, it seems he simply wasn’t immune to the influence of the Ring Cycle.

Having said that, the stories vary wildly in detail and there’s a host of characters in each that bear precisely no relation to each other. So don’t go thinking that the Ring Cycle is some Lord of the Rings: The Musical, because it isn’t.

One of Wagner’s most famous musical innovations was his practice of attaching a "leitmotif" – a special melody, chord or rhythm – to individual characters, concepts and situations in his operas. Wagner didn't exactly invent the leitmotif, but he certainly popularised the idea: the Ring Cycle contains literally hundreds of them, each heralding the presence (or soon-to-be-presence) of a character or idea. This has the effect of psychologically priming an audience to expect (or recall) the presence of that character or idea, even if they can’t see them on stage.

Wagner’s leitmotifs profoundly influenced the generations of composers that followed him – so much so that the word itself is now effectively shorthand for any signal or sign that represents an idea. In music, though, leitmotifs have proved especially effective for film soundtracks.

Think about that menacing bass line in Jaws (SHARK!), the Imperial March from Star Wars (DARTH VADER!) or the main theme from The Third Man (HE’S ALIVE!).

Anyone who studied TS Eliot’s The Wasteland in their youth knows it’s a poem that references basically everything, including the Ring Cycle. To understand how, you’ll need to know about the Rhinemaidens – Woglinde, Wellgunde and Flosshilde – who appear in the very first and last acts of the cycle.

At the beginning, in Das Rheingold, a dastardly dwarf called Alberich swims to the bottom of the river Rhine and pinches the alluring maidens’ horde of gold; to get his hands on it, he has to forswear love. Alberich uses it to forge a ring that will make its wearer the king of the world. Understandably, the Rhinemaidens are a bit miffed about it. Fast-forward to the final act of the last opera in the cycle, Götterdämmerung, and they’re understandably still upset, lamenting the loss of the Rhinegold with a rhythm that Eliot imitates in The Waste Land.

*SPOILER ALERT* It's OK, they get the gold back at the end.

In Eliot’s poem, the three Thames-daughters that appear around line 292 are the "degenerate cousins" of the Rhinemaidens. These ladies turn out to be nymphs who have abandoned the Thames in disgust at the pollution of modernity, rather than over any contraband metals. Still, Eliot even borrowed words from Wagner’s libretto (although these are, arguably, better set to music): "Weialala leia, wallala leialala".

More to explore on Wagner's Ring...