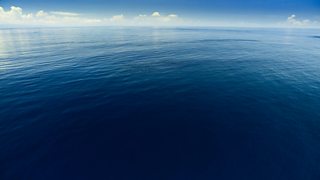 The biggest challenge of filming in the vastness of the Ocean is to find your subject. And the Blue Planet team wanted to film one of the most elusive of them all – the rarely witnessed…‘boiling sea’. Until now, this feeding frenzy of thousands of tuna leaping out of the water to catch their prey, turning the sea white with their splashes, has been the stuff of legends.

After some promising sightings off the north-east coast of Australia, the team headed a hundred miles out in the Pacific Ocean. To film the boiling seas, the team first had to find a large shoal of bait fish – most likely to be lanternfish – rising to the surface to spawn. A few days out, the scientist spotted a giant shoal on the echosounder. One of the best ways to film at such depths in the open ocean is to use an ROV, a remotely operated vehicle carrying a light sensitive camera. Not easy to launch off a seesawing deck on the high seas. But there was almost nothing there – just a thick layer of plankton. Over the next three weeks, the crew didn’t find a single lanternfish. It transpired that the team had been filming at the very start of El Nino – an unpredictable climatic event that can suddenly raise sea temperatures and disrupt the spawning behavior of fish.

It would be eighteen months before conditions would normalise and the team could continue their quest. But rather than searching for their prey, this time the team would look for their predators, on the other side of the Pacific ocean, off Coast Rica… 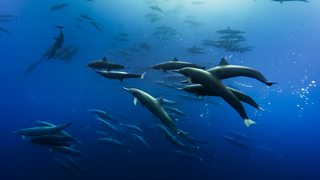 Here locals report their very own sightings of the boiling seas, driven by spinner dolphins that round up the lanterfish leading to a feeding frenzy. But in the endless blue, even finding a massive pod of dolphins wasn't easy. Twenty miles offshore, based on a scientific research vessel with a helicopter deck, series producer Mark Brownlow and aerial cameraman Ted Giffords, scanned thousands of square miles of ocean. But after three days of searching by helicopter there wasn’t a dolphin in sight.

Meanwhile the dive team, on board a livaboard vessel, were also out in the Big Blue searching for the ‘boiling sea’. Assistant producer Rachel Butler teamed up with specialist cameraman Richard Stevenson who attached a hi-def ‘polecamera’ to the side of the boat. This would allow them to capture stunning tracking images of the hunting dolphins as they sped along at 10 knots.

Free-diving cameramen Roger Munns and Alfredo Barroso were tasked with capturing the dolphins' feeding frenzy from underwater. To stand the best chance of finding the dolphins feeding, Rachel decided to follow them from underwater by hanging onto the side of the boat. Known as ‘manta towing’, she searched for any clue to where they might go next. 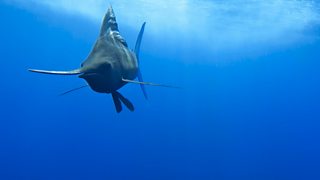 Finally, after ten days on the open ocean, the aerial team got their reward- a super-pod of spinner dolphins, five thousand strong and one of the largest gathering of dolphins to be found anywhere in the ocean. The dolphins went on to round up the lantern fish and, just like the old fisherman tales, the sea began to boil as thousands of yellow fin charged into the shoals at over forty miles an hour. For the first time the aerial team were able to record the epic scale of this spectacle.

After three weeks of searching, the dive team too managed catch a huge feeding event on their second to last day. For Roger Munns the filming was incredibly intense as tuna rocketed over his shoulder from all directions. But his biggest concern was to avoid collision from the mobulas. With their three-metre wingspans, these rays would swoop down into the scattering baitball, followed closely behind by the sailfish picking off the injured lanterfish.

But after just fifteen minutes, all that was left of the massive feeding event was a silvery confetti of fish scales, drifting down into the depths. The hardship of this shoot typified the challenge of working in the vastness of the ocean wilderness. But the reward – a moment of unparalleled drama in the immense expanse of the big blue. 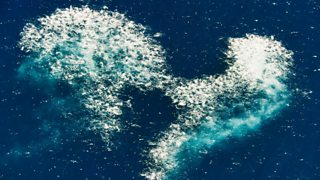 When the crew returned to the UK they shared the footage with scientists from the Manta Trust & Scripps Research Institute. Up to now it was thought that mobula rays are passive plankton feeders. However, upon analysis of the unique footage a scientific paper is being published revealing that mobula rays are actually active predators. Just one of many examples where Blue Planet II have collaborated with the scientific community to better our understanding of life beneath the waves. 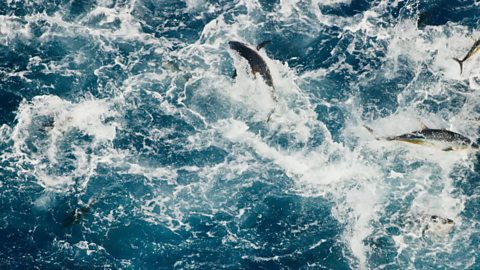 Lantern fish provide a rare banquet for some of the ocean’s top predators.