Can learning a new language boost your brain?

In the UK we have a reputation for being somewhat lazy when it comes to learning a second language. However, research suggests it could be beneficial for our brains – and could even delay dementia. The problem is that getting to grips with a new language can be a struggle - especially as we get older. But could it be worth it? Is it ever too late to learn? And how good do we need to be in order to reap the rewards? 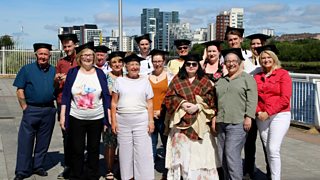 To put language learning to the test we teamed up with Dr Thomas Bak, a neuroscientist, and Professor Antonella Sorace, a leading expert in bilingualism, both from the University of Edinburgh. We recruited 20 volunteers who had never tried to learn Spanish before and enrolled them on a language course taught by Lingo Flamingo: a non-profit organisation based in Glasgow who work in partnership with the University.

Over four weeks, our volunteers attended classes three times a week, for two hours at a time, and had homework to complete. Before and after the course they undertook cognitive tests measuring attention, memory and mental flexibility.

Unbeknown to our volunteers, they had also been carefully selected according to their age. Half of them were between 18 and 30, and the other half were over 56. This was so that Thomas and Antonella could compare the impact of language learning on older and younger people.

After the four-week course, there was an overall improvement for everyone in the cognitive tests. However, when we looked at the two age groups, the older participants had improved more than the younger ones.

This is consistent with previous research, which showed that language learning leads to improvements regardless of age, and that older people can improve even more over the same period of time.

The other interesting thing that emerged from our experiment was that these improvements did not depend on how good our volunteers were at speaking Spanish. In the four weeks that we ran our study, none of our volunteers became fluent, but they did practise regularly, and this was enough to give them the cognitive benefits. This reinforces what Thomas and Antonella have found in other research – that practice is more important than proficiency, and that consistent practice means the cognitive benefits are maintained.

What’s more, as well as offering cognitive improvements, there are other benefits that learning a new language can offer, both to our social life and our confidence.

Why learning a new language is good for the brain

Why is learning a language better for our brains than something like Sudoku? Dr Thomas Bak compares it to going to a gym: Sudoku is like going to the gym and using one machine to repeat one movement. Learning a language, on the other hand, is like using 20 different machines which require lots of different movements. That’s because language learning engages a number of different parts of the brain and boosts the connectivity between these different areas. In turn, this improved connectivity improves your higher mental function.

Every 3 minutes in the UK, someone is diagnosed with dementia or has a stroke. Studies have suggested that learning a second language could delay the risk of dementia by up to 5 years, and that it can also improve the rate at which you recover from stroke.