If you’re considering a career in music, you'll probably want to get get some tips from someone who has been in the business a while. How about... Sir Simon Rattle?

Sir Simon is one of the most renowned conductors on the planet. He bagged his first major gig at the Bournemouth Symphony Orchestra aged just 19 and since then has led some of the world’s greatest orchestras and ensembles. We can confirm that he's also absolutely lovely.

Sir Simon was our guest for the S2 finale of BBC Young Musician podcast – so here's what we learned. All the quotes are Sir Simon's: listen to the podcast for more (and to hear Jess, Sam and Zeynep getting seriously starstruck).

1. Music may be your passion, but relationships deserve just as much hard work

We simply have to try to keep some kind of balance. It helps if you can go into it with the idea that music is about life and describes life, rather than the other way around. For so many of us, it’s easy to escape into the music because it’s so immediately emotionally satisfying and fascinating. But at the end of your life, it's family and the people you love that you're going to remember – not having done concerts or whatever it is.

2. Everyone messes up at some point – it’s how you deal with it that matters

I don't think there is anybody in the music business who hasn't had some really bad experiences. Everybody has to go through it. 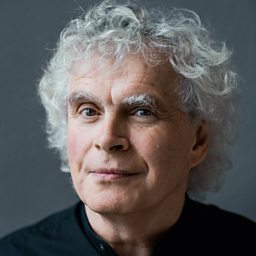 The real difficulty is not letting the carpet be pulled out completely from underneath you. Any bad experience affects your confidence, and that can lead to a downward spiral. But I don't know anyone who hasn't gone through this.

3. Don’t be afraid to show a little vulnerability

When I first went to conduct the Vienna Philharmonic 30 years ago, I was so desperately nervous that I thought dental work or death were two better options. I decided that I would not say anything at all to the orchestra until we got to the first coffee break, apart from "good morning".

Sir Simon pictured at the BBC Proms in 1981

As I stepped down at the interval, the first cellist looked up at me and said: "We're really enjoying this, you know." I said: "Really? Because I am just so nervous, I hardly know where to put myself." The cellist replied: "Simon, please don't be nervous. We want this to be good; we're nervous. So please don't you be nervous as well!" This was the most incredibly generous way of putting it. The idea that we were all in in it together helped me so much. 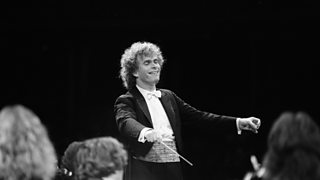 We all have problems, we all have to face them, and everybody understands. You'd be amazed how generous people can be if you show a little bit of vulnerability.

I left the Royal Academy at 19 not knowing anything about the practicalities of life. I was 27 before I discovered that *I* was supposed to pay National Insurance, not the employer! Some poor woman came round one night to send me to jail or fine me thousands of pounds. She took pity on me when she realised: "Oh my God – this man really is that stupid.”

It is possible to have absolutely no practical knowledge of what goes on the world. A lot of musicians leave college without knowing very, very important things.

5. Even world-famous musicians have identity crises

In my 20s, I had a "Jekyll and Hyde" thing where I wasn't really sure whether I liked the musician in me. Often I would listen to the music I was making and think: "Who the hell IS that person?"

So I took a sabbatical in my mid-20s to find out whether I could exist for a year without music. Was it so deeply in my heart and drive that I would just fall to pieces? I studied English instead. It ended up as three university terms, but I made myself a promise I would listen to no music for those months and see whether I could survive.

In fact, I found if there was something just as powerful to take its place then that was wonderful. I was glad I could live without it; that it wasn't just a drug. But of course when I went back and heard my first concert, The Eroica Symphony played by the Brighton Philharmonic, I started sobbing so strongly that people around me moved away. I was so overwhelmed by the power of this music that I hadn't heard for months.

After that year, I had much less of a problem with the Jekyll and Hyde feeling.

6. The bonds you make with fellow musicians will be intense

7. And the secret to success is…

Work like hell, stay curious, and realise that people around you are actually much nicer than you think they might be. People are very supportive in this profession. Basically, people want to help – and sometimes you have to let them help.

Good luck to everybody listening to the podcast: we've all got your back. Everyone's going to support you if you go into this business. We will all do our best because we all started there and we've all been in it. We all feel we're in the same boat together. That, I hope, you can trust.

Sir Simon Rattle guests on S2 E10 of BBC Young Musician podcast in an episode all about making a life in music. Listen now and subscribe on BBC Sounds to download every episode so far.