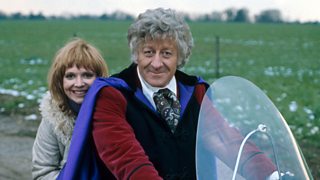 Although a helicopter was used during the filming of The Daemons, the short sequence of it exploding as it hits the heat barrier was not actually filmed specially for the story. Instead, a short clip from the James Bond film, From Russia with Love, was used.

After a whole season of stories featuring the Master in which he always manages to escape, the Doctor’s nemesis is finally captured by UNIT. When next we see him in The Sea Devils he will be residing in prison – but not for long!

ORDERS FROM THE TOP

In Episode Five, Nicholas Courtney delivers what has become the Brigadier’s most famous line. Confronted by the animated gargoyle, Bok, the Brigadier gives the order: ‘Chap with the wings there. Five rounds rapid!’

THE FALL OF ATLANTIS

The Daemons presents the second of three explanations that Doctor Who has given for the destruction of the legendary city of Atlantis. The first was in The Underwater Menace. Here Azal claims that his own race were to blame. We’ll actually visit Atlantis again and see its end first hand in the following season’s The Time Monster.

Two weeks location filming was undertaken for The Daemons. The village of Aldbourne in Wiltshire was chosen to be Devil’s End as it offered a church, a traditional village green and a genuine Bronze Age barrow was not far away.

Azal was played by very tall actor, Stephen Thorne. Originally Thorne was intended only to play the body of Azal whilst miming to the voice. But Thorne proved capable of doing the voice himself, despite a troublesome set of large, Daemon false fangs. Thorne would return to Doctor Who as legendary Time Lord Omega in The Three Doctors, an Ogron in Frontier in Space and the male form of Eldrad in The Hand of Fear.

Following the broadcast of the series an irate viewer wrote to the Radio Times to express their disgust that the BBC had resorted to blowing up a perfectly lovely old English church, just to make a TV show. Producer Barry Letts patiently replied that in fact it had only been a model that was destroyed and Aldbourne’s church remained intact.

The scene where Jo gets the Doctor lost because she’s been reading a road map upside-down is said to have been inspired by a real-life incident when Jon Pertwee and Katy Manning were driving to a location shoot… but not in Bessie!

A recording of some of Roger Delgado’s dialogue can be heard in Utopia, the Tenth Doctor story that re-introduced the Master. In that adventure, when the character is on the verge of recalling who he truly is, he seems to hear several things from his own past – words and laughter. The words he hears are from The Daemons.

The story was directed by Christopher Barry who was previously at the helm for The Rescue, The Romans, The Savages, The Power of the Daleks and much of The Daleks. He returned to direct The Mutants, Robot, The Brain of Morbius and The Creature from the Pit.

Jon Pertwee frequently referred to The Daemons as his favourite story. Incidentally, an omnibus version of the adventure was screened on the afternoon of 28 December, 1971. Some play was made of the fact that this offered the first chance to see an entire Doctor Who adventure in ‘one go’, although some might argue Mission to the Unknown had already provided this opportunity during the First Doctor’s era…

All five episodes of The Daemons are held in the BBC archives. However, only Episode Four is the original colour version. Colour has been restored to the remaining episodes by combining the black and white film copies with an off-air colour recording from America.