The rise and demise of the flea circus

Roll up! Roll up! Marvel at a dazzling performance by the smallest circus artistes on Earth…

Flea circuses were a combination of flamboyant showmanship, staggering chutzpah and genuine craftsmanship. They were hugely popular between the 1830s and 1960s in England and Germany.

No pier or fairground was complete without a tent into which spectators would be ushered to watch human fleas perform their feats, accompanied by the rapid patter of a ‘professor’, as all flea circus ringmasters were known.

1945: Professor Ruhl's fleas pulling a miniature roller and cannon, a flea hanging from a hook and a flea-powered carousel. The fleas are stored in the jar on the left.

Initially, the focus was not on the fleas, but on the miniature masterpieces of craftsmanship they were attached to. 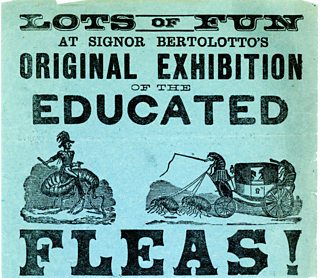 'Flea circuses were started by jewellers or watchmakers as a display of miniature objects,' says zoologist Dr Tim Cockerill.

It was an acclaimed showman from Italy, Louis Bertolotto, who transformed these early shows into a phenomenon.

In the 1830s, his flea circus became the hottest ticket in London, performing in front of crowned heads of Europe in a touring career that lasted over 50 years.

Fleas were not known for possessing any particular dramatic flair. They were simply, well, everywhere.

Up until the 1940s in England, most people shared their homes and beds with human fleas. They were a fact of life and even featured in an episode of Laurel and Hardy and two Charlie Chaplin films.

Fleas made good performers as they are some of the best jumpers in nature, due to elastic cuticles made of resilin in their legs. These allow them to charge up energy and release it in a split second.

Human fleas in particular have exceptionally strong back legs - stronger than dog or cat fleas.

The fact that fleas drink human blood made them a convenient performer to care for - a simple rolling up of the professor’s sleeve and the fleas could feed happily before their next performance and live for several months. 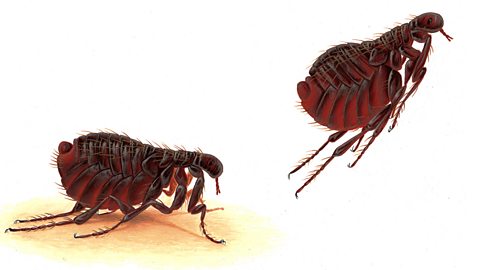 How and why fleas jump so high

Theresa Howard and the late Dame Miriam Rothschild on the jumping ability of fleas.

One of the stories told by the professors was that their wild, untrained fleas could be tamed by keeping them in a shallow glass case with a lid. After a few days of bumping their heads, the fleas were supposedly docile enough to be attached to the circus props.

In reality, fleas have no capacity for learning but certain fleas will be better jumpers, pullers or kickers.

Some fleas would have understudies; a separate set of fleas would be kept on hand by the professor should anything unfortunate befall the first.

Dr Tim Cockerill claims to be able to make a flea jump through a hoop on demand but won’t divulge his secret!

A flea jumps through a hoop on command.

How was it done?

To misquote Mrs Beeton, ‘first catch your flea’. This was easily done at the time - a quick perusal of your friends or your bed linen and you could assemble a cast of talented performers relatively quickly. 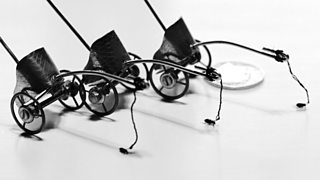 1956: Three fleas are harnessed to miniature chariots for a race.

The tricky part was making the circus apparatus for the fleas. Many professors were ex-watchmakers or jewellers, skilled in the assembly of incredibly detailed machinery.

A popular feat for a flea to perform was to pull a chariot. A tiny vehicle, often made of ivory, half a centimeter across, complete with wheels, was crafted.

A piece of extremely thin copper wire was looped around the flea’s neck. It couldn’t be too tight or the flea would be unable to eat nor too loose or the flea might escape.

This harness would then be attached to the chariot or whatever apparatus the professor had engineered.

The flea’s disproportionately strong legs would allow it to travel across the ring, towing the chariot behind.

The decline of the flea circus

Some people believed this form of entertainment declined in the 1950s because of concerns about animal cruelty.

Flea circuses were indeed mentioned in the House of Commons in relation to animal protection in the 1920s, but it was to highlight what was seen as the ridiculous nature of a proposed act to protect performing animals.

In fact it was hygiene, vacuum cleaners and warmer homes that wiped out the performers. Human fleas simply became scarce.

Although the pleasure of sleeping in a flea-less bed is undeniable, it seems a shame that we have been deprived of witnessing this extraordinary art form. However, if you are determined to experience this oddest of spectacles, you can still find one in Germany. The only genuine flea circus in the world can be found there and it performs annually at Munich's Oktoberfest.