On November 24 1859, Charles Darwin published compelling evidence for the theory of evolution in his controversial book, 'On the Origin of Species by Means of Natural Selection'.

To help introduce 7-11 year-olds to his work, we've pulled together a collection of resources from around the BBC.

Darwin and Alfred Wallace - The Theory of Evolution and Natural Selection

Darwin and Alfred Wallace - The Theory of Evolution and Natural Selection

Using this video in schools

This vlog style film explores how Charles Darwin and Alfred Wallace came up with the theory of evolution and process of natural selection. It is set in 1858 and explains the adaptation of plants and animals to their environment. The film covers how they both - independently - explored the connection between animals and humans, and asked what the origin of plant and animal species is; where we came from, and how we all came to be. They found that humans shared a common ancestor with chimpanzees. 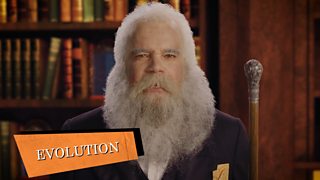 In his book 'On the Origin of Species by Means of Natural Selection', Darwin outlined his theory of evolution based on ‘survival of the fittest’. That is, the survival of only those most well-adapted to their environment.

To prove his hypothesis, Darwin travelled on the HMS Beagle to Australia and the Galapagos islands. Whilst there, he used the scientific method of observation and documentation to note the adaptions of local finches to suit their food sources. Meanwhile, Wallace travelled to Brazil to collect butterflies, insects and birds. He also noticed variations in species depending on their living conditions. His specimens were destroyed by a fire on the return journey, but he persevered with an eight year trip to Singapore, Malaysia and Indonesia; observing species and categorising them based on their characteristics.