Forget all the myths you’ve heard about the Dark Ages: medieval scholars didn’t think the world was flat – quite the opposite. In the 14th century, scholars across Europe communicated and discussed complex scientific ideas, developing discoveries made in the Islamic world that themselves built on the achievements of the ancient Greeks.

New Generation Thinker Seb Falk is an expert on the sophisticated scientific instruments that these men – many of them monks – used to explore the universe around them. Were these devices the medieval equivalent of today’s smartphones? Chaucer certainly thought so...

The single most popular piece of tech in medieval times was a device called the astrolabe.

These portable, multifunctional devices were invented by the Greeks, developed by Arab astronomers and first brought to Europe in the 12th century. By the 14th century, they had acquired a status comparable to that of smartphones today. They were everywhere. 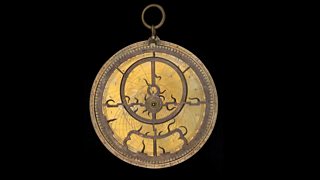 Brass astrolabe from Europe, c. 1400, from the collection of the Museum of the History of Science, University of Oxford (52869)

Astrolabes were beautiful and elegant:; a design classic and a definite status symbol.

Like smartphones, many models could fit snugly in the palm of your hand, although some were as large as dinner plates. (Not that many monks in the 14th century would have made the comparison; they were more likely to own an astrolabe than a dinner plate.)

OSs and accelerometers aside, a key difference between astrolabes and smartphones was that astrolabes weren’t mass produced. Each one was unique, perfectly fitting the needs of the person who made or commissioned it. So today we can read the intricate features of astrolabes as evidence of the way a particular mind worked.

Astrolabes told their owners a surprising amount about the world around them.

They may not have had the BBC Weather app installed as standard, but astrolabes could be used to tell the time and to observe and track the motions of the stars. They also told you whether you were facing north, south, east or west, and could be used for surveying.

They also came in handy when it came to predicting the future.

It may seem odd that men of God should have been dabbling with fortune telling, but in the 14th century, the disciplines of astronomy and astrology were not as separate as they are today.

In medieval times, astrology was a serious science, well defined and durable

In medieval times, astrology was a serious science, well defined and durable. Back then, people thought that if the heavens could affect the weather, it was perfectly reasonable to assume that the stars could also affect the human body.

And since many of our actions are affected by physical needs and appetites, it made sense that our bodies could be influenced by the stars too. So it wasn’t unusual for monks to look heavenwards – in more ways than one – when wondering what it was God had planned for them, whether in terms of the weather or their physical health.

Brass astrolabe from Paris, c. 1400, from the collection of the Museum of the History of Science, University of Oxford (41468)

It was thought that astrology could explain unusual imbalances in your health and could guide the timing and tactics used to correct these imbalances. Medieval physicians referred to painstakingly constructed computer tables of astrological houses, and would argue over which days were the most auspicious to perform medical procedures like bloodletting.

After a dispute between two doctors in 1437, the University of Paris recommended that every physician and surgeon should carry an astronomical almanac and an astrolabe.

These objects, hanging from a medical man’s belt, didn’t just help him divide the sky accurately. They were also symbols of his skills – just as today, the stethoscope around the neck of a doctor gives him or her a certain aura of competence.

Brass astrolabe from England, c. 1350. The dog's head indicates Sirius, the dog star: it probably originally featured a tongue that extended to indicate Sirius's location more precisely. Image from the Museum of the History of Science, University of Oxford (49359)

Chaucer was among the medieval thinkers bowled over by “astrolabe culture”.

He even wrote an instruction manual that included descriptions of 46 different uses for the device. His writings also highlight some key similarities between astrolabe and smartphone culture. 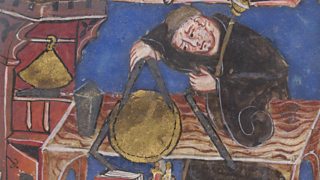 Have you ever swerved to avoid someone who’s so absorbed in their phone that they don’t look where they’re going? This was a problem in the 14th century too, apparently. In The Miller’s Tale, Chaucer describes a monk who comes a cropper while examining the stars:

This roughly translates to a gag that Tim Vine would be proud to call his own:

This guy was so busy trying to read the future in the stars that he fell into a pit.
Funny how he didn’t see that coming.

New Generation Thinker Seb Falk explores a world where monks loved their gadgets, where science and religion went hand-in-hand, and where a wooden disc, a brass ring and some silk threads were all you needed to model the motions of the stars. Listen online or via the iPlayer Radio app.