What are fermented foods and which are best for improving our gut health?

Traditionally many different cultures have used the process of fermentation to preserve foods. 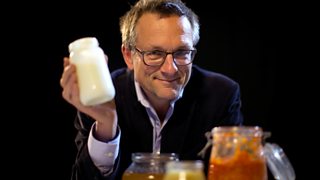 In India lassi was a common pre-dinner drink, Asian cultures enjoy pickled fermentations of cabbage, turnips and eggplant, kefir originated in the northern Caucasus Mountains and sauerkraut is associated strongly with Germany. Other fermented foods include yoghurts, cheeses, sour dough bread and chutneys.

However, as well as lasting longer, fermented foods often contain a variety of ‘good’ bacteria which, if they can survive the journey to our gut, can be beneficial for our health.

In our big probiotics study, the group taking a fermented milk based drink called kefir saw significant changes in their gut bacteria – specifically a rise in a family of bacteria called Lactobacillales, which are known to maintain gut health.

We wanted to explore this further and find out which other fermented foods might be good options for improving our gut bacteria, so we gathered some of the most popular products and put them to the test.

We gathered together homemade versions of these foods, made by volunteers from The Fermentarium, and we also bought readily available ‘off the shelf’ versions from supermarkets and shops. Once we had all of our samples, we sent them to the lab for testing.

Martha Villegas-Montes and a team at Roehampton University analysed our samples, looking for specific bacteria that we know to be good for our guts and Dr Paul Cotter from Teagasc Food Research Centre in Cork presented the results.

When we looked at the shop bought sauerkraut, kimchi and soft cheese we didn’t find any of the bacteria we were looking for. This is probably because these foods will have been pasteurised to make them safe and to improve their shelf life - both important factors in commercial food production. The downside however, is that these processes also kill off the ‘good’ bacteria that might be present.

Two of our shop-bought foods, the kefir and the kombucha, did contain levels of the bacteria. This suggests that both of these foods were made using traditional processes and were not pasteurised, meaning that the good bacteria survived.

In our homemade foods, which had all been produced using traditional methods, we found diverse strains of bacteria and higher levels, particularly of a type called Lactobacillus.

There are many different species and strains of Lactobacillus – some that have good health-giving properties that we know about, and some that don’t. But by eating a fermented food with lots of different varieties, like our homemade versions, there is a chance that some of the strains present will be good for you.

There’s still a lot of research that needs to be done into the world of our gut bacteria, but so far studies suggest that for general good gut health, a range of bacteria is best, so it would seem that traditionally made fermented foods - whether they be homemade versions or commercial varieties that are unpasteurised - are a good way to achieve this.

But there are important things to be aware of if you’re planning to produce your own homemade fermented foods. Just as homemade versions can contain greater numbers and varieties of beneficial bacteria, they can also contain harmful bacteria, particularly if they are not produced or stored correctly. So if you do want to make your own you should follow a recipe, use the correct equipment and store your foods at the correct temperature.