Ants are the ultimate colonisers.

A driver ant can lift 5000 times its bodyweight

There are over one hundred trillion ants on earth, approximately 14,000 ants for every human. If you weighed every human and all the ants, the scales would balance.

The resin of conifer trees contains antibiotic chemicals and is harvested by the European wood ant to disinfect their nests. A large nest can contain up to 20kg of resin.

Ants live in colonies which can have populations in their millions. The pressure of feeding so many mouths has made ants the masters of finding food. Many species ferociously hunt their prey, dismember them and return their bounty to the colony, but some also have more ‘modern’ strategies and are in fact the world’s oldest farmers, growing crops and keeping livestock. Leaf and grass cutter ants, as their names suggest, use leaf and grass cuttings to cultivate a unique fungus within their nest. Each piece is chewed up and mixed with the fungus; the fungus is then continuously cared for. They even use pesticides to remove unwanted fungal strains or pests from their precious crop. Other ant species herd aphid 'cattle', which they eat and also milk for honeydew, a plant sap excreted by the aphids. They even have their own ‘fences’ to prevent the aphids from straying away. Chemicals on ants’ feet subdue and sedate the aphids, keeping them nearby. 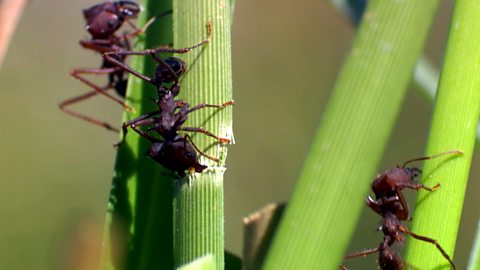 Leaf cutter ants have developed an ingenious way to feed their colony.