Five fantastic medieval beasts and where to find them

Literature in the Middle Ages often depicted strange bizarre beasts that were part-human and part-animal as a way of explaining our existence.

To coincide with Radio 3’s Free Thinking programme on what it means to be human, New Generation Thinker Professor Sarah Peverley, from the University of Liverpool, explores five human-animal hybrids…

Inherited from Classical culture, medieval sirens were depicted as part-human from the waist up, and part-bird or part-fish from the waist down. Some early examples combine avian and piscine features in the lower body. Often confused with the mermaid, sirens and their enchanting song frequently represented the devil beguiling sinners with worldly pleasures and luring their souls to destruction. 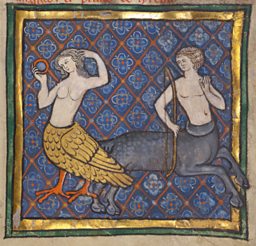 A Siren and a Centaur (Thérouanne, France) courtesy of the J. Paul Getty Museum

Part woman, part fish, mermaids were believed to inhabit the waters of the world. They are commonly portrayed with a comb and mirror, symbolising vanity, but in some instances they adopt more positive meanings. In the Cornish Ordinalia, a collection of fourteenth-century religious plays, the mermaid’s hybrid form is used to explain the dual nature of Christ (part-man, part-god).

A mermaid with a mirror and comb and a traveller being bitten by a dog, MS 42130, f. 70v, courtesy of The British Library

A female-headed serpent commonly seen in medieval depictions of the biblical Fall of Man. Described as virgin-faced by the twelfth-century theologian Peter Comestor, the dracontopede was often shown sporting a crown or elaborate hairstyle, which reflected Eve’s pride and pursuit of sovereignty. The beautiful head was also used to explain how the Edenic serpent could talk. It represented the wiles of the devil and the danger of pride.

Another popular creature acquired from Classical mythology. In addition to representing the astrological sign of Sagittarius, the centaur symbolised a paradoxical range of ideas from intelligence, healing and strength, to lust and duplicity. Its hybrid form captured the struggle between rational and base behaviour. Centaurs and onocentaurs (part-human, part ass) often look the same in medieval art, but the allegory of the onocentaur was more limited in its association with lust and hypocrisy.

The temptation of Eve by a Dracontopede and the goddess Diana gives herbs to Chiron the centaur. Images courtesy of The British Library.

A composite creature supposedly found in India: with the bright red body of a lion, the tail of a scorpion, the face of a man, and three rows of teeth. Its voice was said to sound like a trumpet. According to the encyclopedic books about animals known as Bestiaries, the manticore was one of the cruellest animals, taking great pleasure in eating human flesh. It represented the devil and, like most hybrids, served as a warning to sinners.