Should I be concerned about arsenic in my rice?

Rice consumption is on the rise in the UK, with a whopping 150 million kilogrammes eaten in 2015. 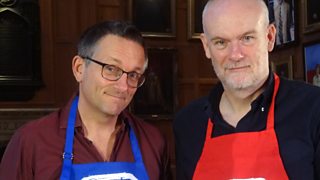 In addition, many of us also enjoy rice cakes as healthy snacks and choose rice drinks as an alternative to milk.

So when Trust Me came across headlines claiming that levels of arsenic in rice could be worrying, we wanted to find out more about it – is arsenic really a problem in rice? And if so, what can we do about it?

Arsenic is a naturally occurring element which can be found in soil and water.

It can be toxic, particularly in the form of inorganic arsenic (iAs), and is classified as a category 1 carcinogen by the European Union, which means that it’s known to cause cancer in humans.

Levels of arsenic in rice

Because arsenic can be found in soil and water, small amounts can get into food, but generally these levels are too low to cause significant concern. Rice however, has around 10 – 20 times more arsenic than other cereal crops. This is because it is grown in flooded conditions which make it much easier for arsenic to leave the soil and enter the rice.

Michael Mosley met Prof Andy Meharg from Queen’s University, Belfast, who has worked in this field for decades. He regularly tests rice and rice products and in general he has seen the following:

In the past, Prof Meharg found levels of arsenic in rice products that would no longer be allowable today, but we now have legislation that limits the amount of arsenic allowed in rice.

In 2014 the World Health Organisation and the UN’s Food and Agriculture Organisation set guidance for arsenic levels in rice. The European Commission has also set levels for rice and rice products sold in the EU, with lower limits set for rice products specifically targeted at babies and small children.

However, there is some debate over whether this current legislation is sufficient. Prof Meharg believes that more needs to be done to protect those who eat high amounts of rice and to protect children, as there is evidence linking childhood exposure to arsenic to developmental problems.

What’s more, while there are tighter controls around rice products that are specifically aimed at children some, including rice cakes and puffed rice cereal, are not classed as a food “destined for children” under EU law so can actually contain adult levels of arsenic.

When it comes to rice milk, the Food Standards Agency advises that rice drink should never be used as an alternative to milk for children below the age of 5. However, there is no legal obligation for rice drink producers to issue this warning on their packets.

What do the regulators say?

We approached various bodies for their views on the current guidance.

“Rice is a very important staple food in certain world areas and a sufficient supply of rice is critical to ensure food security. Certain contaminants, such as arsenic, can be harmful to humans and measures will need to be put in place to ascertain an exposure for humans that is low enough to provide a protective value for public health, while at the same time still allow or sufficient trade for this commodity. For arsenic, a maximum limit of 0.2 mg/kg of inorganic arsenic for polished rice has been discussed by Codex Alimentarius as a suitable limit to ensure that both goals (protection of public health, fair trade) are met as best as possible…. The work on husked rice is still on-going, priority has been given on the work on polished rice as the more frequently consumed food commodity.”

We also approached the Food Standards Agency whose advice is as follows:

“The FSA advises that consumers should eat a healthy, balanced and varied diet and rice and rice products can be a part of this. However, we have produced specific advice that toddlers and young children (ages 1-4.5 years) should not be given rice drinks as a substitute for breast milk, infant formula or cows’ milk. This is because of their proportionally higher milk consumption and lower bodyweights compared to other consumers.”

“Rice processors have taken steps to ensure that the rice they place on the market is in compliance with the new limits. Since January 2016 more than 1000 samples have been tested by European Rice Millers (Including those in the UK) and 99.5% have been found to be in compliance with average levels well below the levels specified; non compliant rice is not placed on the market”

The Food Standards Agency were unable to tell us how many samples had been tested this year and if there had been any failures.

However we also spoke to a number of ports in the UK approved for the importation of food. Some ports reported that they had tested samples of rice and that all samples had passed, yet other ports confirmed that they have carried out no testing despite receiving shipments of rice.

A number of ports said that this was because there is no testing schedule in place and no legal obligation to test.

So how much rice is deemed to be ‘safe’?

This is a tricky question – there aren’t agreed instructions about this that we can easily share. However, we did some calculations to provide a sense of what daily amounts of rice are likely to be of low concern based on the information available.

For information on how much arsenic constitutes a low risk, we referred to the Food Standards Agency’s Committee on Toxicity in Food. Our calculations also assumed that the rice contained arsenic levels equivalent to the EU limits.

The resulting figures should in no way be considered as targeted daily amounts. They also do not take into account that additional arsenic could get into our bodies from other food and drink sources.

We have calculated that a constant daily intake of the following would currently be classed as being of low concern:-

Fortunately, if you’re concerned about arsenic exposure, or you simply like eating rice, there are some simple steps you can take to reduce the arsenic levels. Michael Mosley teamed up with Prof Meharg to test some different rice cooking methods.

If, like many people, you cook your rice to dryness or use a rice cooker, the arsenic is simply absorbed back into the rice. However, if you use more water, so that it is not all reabsorbed, the arsenic remains in the liquid instead.

What does all this mean?

As with any food, rice should be eaten in moderation and as part of a balanced diet. For most of us our rice intake won’t be enough to cause concern, but for those who eat large quantities of rice and rice products every day there could be a health risk.

Babies and small children are particularly vulnerable so when buying for infants stick to specific baby products that are subject to stricter limits.

However, by cooking your rice using the ‘Trust Me’ method you can remove about 80% of the arsenic in your rice, making it safe to eat more!