Chris and Marcus: Meet the techies

Chris Watts was the chief camera technician on this ambitious series and spent months hard at work building cameras throughout the year it took to make the show.

The bear camera was definitely the hardest as it had the most technology involved. It had 2 cameras, a day camera and a night vision camera, it needed Infra-red lights, a programmable circuit board, a timer mechanism to release the camera from the bear collar at a specific time, radio tracking and live tracking GPS – you name it, it did it!!

The meerkats were definitely my favourite animal to work with. They took us to a world I’d never even imagined seeing before – there’s no way I’d ever fit into a meerkat burrow! We got to work really closely with them throughout filming so it was great getting to know their personality traits and hierarchies within their groups. Every day their character came out more and more so by the end I really felt like I knew this meerkat group personally.

Working with bears generally was extremely challenging and frustrating. The environment these bears were living in was really tricky to work with – the cameras were filling with condensation, the lenses were getting covered in mud, and keeping up with the bears was almost impossible. We didn’t even manage to get all the cameras back so somewhere out there in the hills of Turkey could be some amazing Bear-Cam footage we haven’t even seen yet!

Any time we lost a camera it was very frustrating… the meerkats would leave them down a burrow, the chimps would leave them up a tree… Being that close, and yet so far from the cameras and knowing they could have some incredible footage on them that we couldn’t quite get to was definitely one of the hardest things about the series.

Looking back at the series I feel most proud of the Meerkat-Cam. It took lots of tinkering and finessing on location with the lighting and the harnesses so by the end it felt like we’d made such a difference to improve the image quality throughout the filming period. I also feel pretty impressed that we managed to get such good footage from a tiny camera, it only weighed 25g in the end which is nothing if you think about it.

The footage from the Cheetah-Cam blew my mind. I’d never seen footage from a head of a cheetah like this before, it felt so new and exciting and you really get to feel the speed of the animal whilst watching it. A lot of the footage from the other animals captures behaviour and incredible new science which is fascinating but the special thing about being on a cheetah as it runs is that you just enjoy the ride itself that this camera gives you.

The baboons and chimps were especially skilled at destroying the cameras! They’re very clever animals, they’ve got opposable thumbs and their teeth are incredibly strong so any tiny crevice or edge they can get into within the camera they will and just pull the whole thing apart in seconds!

The cheetahs physically wore the cameras the best, the unique position of the camera on their heads was just so stable. But I was really surprised at how well the meerkats wore the cameras. They’re such a small animals and they just completely ignored the cameras going about their daily business.

There were definitely a few times during build of the cameras where we were really unsure if what we were doing was even possible! The scale of the technology involved and the ambition of the series were immense, often I’d just sit there and think ‘this is crazy’ but we got there in the end.

Well my family dog and cat became animal body doubles a lot for many camera tests. I may have done a bit of running around the neighbourhood in the dark testing night vision cameras… My colleague Alex actually wore one of the cameras himself and crawled around the garden in the middle of the night on his hands and knees pretending to be a cat in order to see how well the lights were working! All in the name of science... 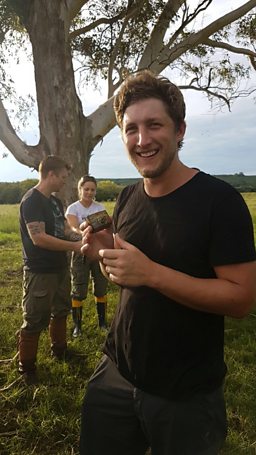 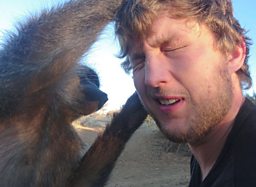 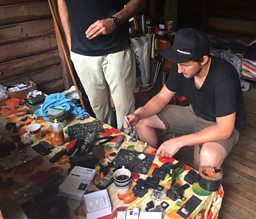 Marcus is our underwater camera guru. He builds remotely operated underwater vehicles for the likes of the British Geological Survey and Plymouth Marine Institute.

The Ray-Cam was definitely the hardest for me and mostly because of the lighting involved. It had a dimming system, where the LED lights got brighter as the ray went deeper and therefore lost natural light. Sounds simple but actually involved me custom building a specially designed dimming circuit which isn’t easy! It also had to go to depths of 1km, float when released and withstand extreme amounts of pressure.

I loved building the Penguin-Cams. The cameras had to be tiny as the penguins were small so I had to really think about the animal and how it moved, to be able to make the best use of the small space. We were talking about the difference between 80g versus 85g – every gram mattered.

It was the last one I made and brought together everything I’d learnt from all the other cameras. It was the pinnacle of our underwater cameras technically speaking. It was designed as torpedo shape especially for drag and positioning with the rays but in the end it actually ended up looking pretty interesting… Kind of like a thunderbird!

I was totally blown away seeing that a bird stole a fish right out of the penguins mouth, there’s no way we would ever have known that happened.

When the crew first sent some photos back to me from their penguin filming in Argentina I just thought “OK this is awesome, there’s my camera on the other side of the world on a penguin!”

Well my friends all thought I’d lost my mind when I jumped into the freezing cold sea in Plymouth in the middle of the night with 3 Go Pros and an infra-red lamp to test some underwater lighting. Luckily because we were testing night vision lighting I couldn’t see what else was in the water with me!! 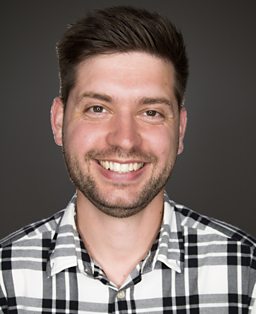 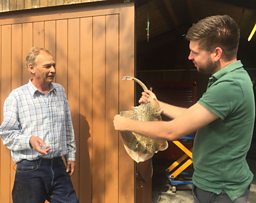 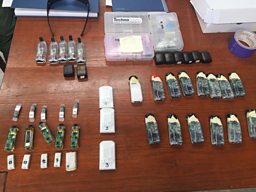