Some of the landmarks in the history of Radio Drama and Shakespeare on the radio.

The early days of radio drama 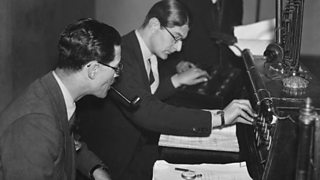 15 November: 5IT in Birmingham and 2ZY in Manchester begins broadcasting.

More about the BBC from wikipedia

16 February: The evening programmes broadcast on 2LO from Marconi House include the quarrel scene (Act 4 Sc 3) from 'Julius Caesar' with Robert Atkins as Cassius, and Basil Gill as Brutus.

(For more about Shakespeare productions see below.)

15 January: 'A Comedy of Danger', by Richard Hughes. The first play written for the microphone to be broadcast on the BBC.

To my mind, one of the best plays ever broadcast (and I do not say this because I had the pleasure of producing it) was "Danger" by Mr. Richard Hughes. Here was something that was written for wireless only; the scene was in a coal mine, and was meant to be heard and not seen. If this play had been produced in a legitimate theatre the stage would have been in total darkness; the players and the action would remain unseen. It was, therefore, ideal for broadcasting, and probably not so good for use in a theatre. In fact, I think it gained by being broadcast, as a sense of distance for such a setting was an inducement to the right atmosphere.

Those were the days of the silent film and our "listening play" (as I dubbed it) would have to be the silent film's missing half, so to speak, telling a complete story by sound alone. Yet even the silent film didn't, strictly speaking, rely on pictures only. It used subtitles. Usually there was a sad man thumping appropriate themes on a piano. Some of the grander cinemahouses even employed an " effects man "; he wound a windmachine and pattered peas on a drum for the storm scenes; he accompanied the galloping cowboy with clashing coconut shells. We thought of using a narrator but agreed it would be a confession of failure. No, we must rely on dramatic speech and sounds entirely ... and it had never been done before.

4 September: First use of the ‘Dramatic Control Panel’ – a basic mixing desk allows for the simultaneous use of a number of studios – in Lance Sieveking’s ’The First Kaleidoscope: A Rhythm Representing the Life of Man from Cradle to Grave’. The mixing panel affected not only the presentation but the structure of broadcast plays. Conventional scene divisions could be dispensed with, allowing for montage effects and stream of consciousness techniques.

‘My fingers knew well enough, even if my head did not. Just as they do on the piano or cello. Without consciously reading the directions on my script I faded the tiny football matches out off the horizon, and wiped the narrator off the map with the singer, and then cut the music off sharply. Now it was play, play, play the instrument if you ever did anything in your life’.

Lance Sieveking – The Stuff of Radio

The BBC moves from Savoy Hill to Broadcasting House.

Val Gielgud made Drama Director following the appointment of Laurence Gilliam who has been given responsibility for ‘Special Programmes’ (later Head of Features).

'The Man Born to Be King' by Dorothy L Sayers

Under Milk Wood by Dylan Thomas, produced by Douglas Cleverdon

The Ruffian on the Stair by Joe Orton

The Hitchhiker’s Guide to the Galaxy

The Lord of the Rings

More about radio drama from wikipedia

To true lovers of Shakespeare, listening should appeal, for there is neither acting, scenery, nor any of the numerous interruptions of the theatre to distract from full enjoyment of the wonderful speeches and sentences with which every play of Shakespeare abounds. I far prefer to sit with eyes closed, to hear the words spoken, and imagine the scenery for myself. ... giving several "invisible" performances ...

‘How many of us thought when the old British Broadcasting Company broadcast the Quarrel scene from Julius Caesar some eight years ago that from that small beginning would evolve an entirely new art – radio drama ?’

The launch of ‘The Electrophone system’ (runs until 1926) which relays live theatre and music hall shows and live sermons from churches. The system operates with rows of microphones installed in the theatres in front of the footlights. By 1908 Electrophone has around 600 subscribers and carries performances from 30 theatres and churches.

More about The Electrophone system

As a move against the elaborate stagey Shakespeare productions of the Irving and Beerbohm Tree era, William Poel founds the Elizabethan Stage Society producing Shakespeare in a radically new way with open stage, a unified acting ensemble, an uncut text, very little scenery and a swift pace of performance.

15 November: 5IT in Birmingham and 2ZY in Manchester begin broadcasting.

16 February: The evening programmes broadcast on 2LO from Marconi House include the quarrel scene (Act 4 Sc 3) from Julius Caesar with Robert Atkins as Cassius, and Basil Gill as Brutus.

28 May : The first full-length Shakespeare play is broadcast. Twelfth Night is directed by Nigel Playfair, and stars Gerald Lawrence and Cathleen Nesbitt, who played both Viola and Sebastian.

Over the following year Nigel Playfair directed four more full-length Shakespeare broadcasts, The Merchant of Venice, Romeo and Juliet (with Ernest Milton as Romeo and Cathleen Nesbitt as Juliet), A Midsummer Night’s Dream (in which Playfair played Bottom) and, on 5th February 1924, Hamlet.

One of the earliest recordings in the BBC Archive is of Sir Frank Benson as Mark Anthony doing Caesar’s funeral oration, broadcast on 21st March 1933.

16th Feb 2013: Harriet Walter as Brutus and Jenny Jules as Cassius record the quarrel scene (Act 4 Sc 3) to mark the 90th anniversary of the first radio drama broadcast on the BBC.