Discover Dylan Thomas at the BBC: performances by Hollywood stars, long-hidden archive clips and Dylan’s own words, telling the story of his extraordinary life and the creation of Under Milk Wood.

With more than 30 minutes of video and 55 minutes of audio including performances by stars such as Tom Jones, Ioan Gruffudd, Elizabeth Taylor, Richard Burton and Charlotte Church and radio clips featuring the likes of Ruth Jones, Cerys Matthews and Dylan himself reading extracts from some of his best-known work.

You will need 720 MB free on Android and Kindle Fire tablets.

Keep the tablet in landscape orientation during installation.

Let the process finish completely before interacting with your tablet. You will know the process has completed when you see the ebook cover. 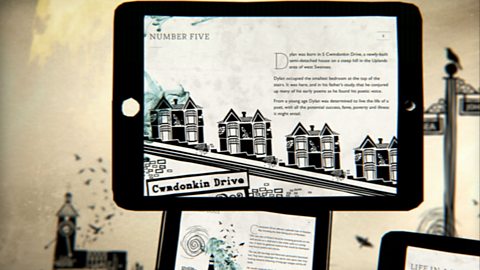 A preview of what to expect when you download Dylan Thomas - The Road to Milk Wood.

FAQs about the interactive book trial