Recording sound in a not so silent world 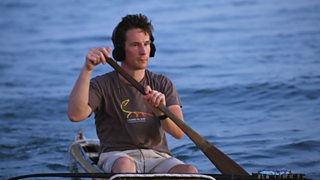 When the Blue Planet II producers asked whether I could help capture the sounds of the animals they were filming, I jumped at the chance. Blue Planet I came out during my PhD when I was first exploring the importance of underwater acoustics for fish behaviour. Since the first series, I have spent many months underwater recording the sounds of marine fish and invertebrates, trying to decode vocal behaviour and interpret my recordings of coral reef communities.

It turns out fish can identify specific habitat sounds when choosing where to live, and also use vocal calls to defend territories, attract mates, detect food and avoid predators. It is important to remember that marine animals spend half or more of their lives in the dark, for example at night on coral reefs, in the winter in polar seas or continuously in the deep ocean. The result is that most marine mammals, fish and invertebrates (pretty much every animal in the sea) have evolved abilities to detect and respond to sound, and often also produce sounds to communicate with each other.

Sound travels nearly five times faster underwater than in air, and loud sounds can be heard across entire ocean basins; indeed, blue whales can communicate over 1000s of kilometres. But this makes identifying the direction of a sound very difficult, and so working with the Blue Planet 2 team has allowed me to test new recording gear with directional hydrophones that capture surround sound. I can now use my recordings to identify individual fish making sounds and so, for the fish time, start to unlock their language in the wild. 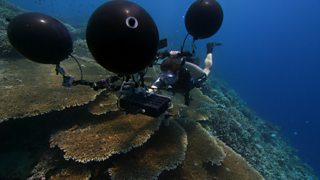 Thanks to the creativity and dedication of the sound editors, these recordings have revolutionised the soundtrack of Blue Planet II, with natural sounds providing a whole new dimension to the different episodes. I enjoyed a whole day on the Great Barrier Reef with Percy the Tusk Fish, recording him smashing open shells, and spent several days recording the clownfish colonies in Borneo.

The work that I first tried in Borneo is now the subject of an exciting Masters project at the University of Exeter, where we have spent several months in French Polynesia decoding clownfish vocalisations and assessing their use of alarm calls.

Unfortunately, many of the recordings we tried to make for the series were polluted with human noise, which is now recognised as a global problem that can affect whales, fish and invertebrates. Recent studies have found that shipping noise causes chronic stress in northern right whales and reduces whale communication distances from several hundred kilometres to less than ten in busy areas.

We also now know that the noise made by pile-driving, making foundations for construction, forces porpoises to leave their preferred feeding grounds and, perhaps most worrying, that naval sonar systems can cause mass strandings of beaked whales. 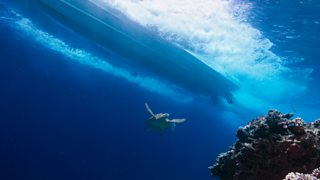 My own research has identified impacts of ships, motorboats, underwater construction and seismic surveys on fish, crabs and molluscs. These impacts include stress, poor anti-predator and foraging behaviour, failure to reproduce and lowered hatching success. We have recently been using the surround sound hydrophone system to characterise motorboat noise on the Great Barrier Reef, where we are assessing the improvements for fish of using quieter 4-stroke boat engines compared with traditional noisy 2-stroke engines.

Unlike many pollutants, noise is instantaneous and we can easily identify the source of the noise. This means we can choose when and where we make noise, and so set up quiet sanctuaries, avoid whale migration routes, stop construction during spawning seasons, contain and reduce engine noise, and therefore make a real difference to this pollutant in the next decade. Reducing negative effects of noise on mammals, fish and invertebrates will give marine communities greater resilience to deal with future impacts such as warming seas and ocean acidification.