As part of Radio 3's Into the Forest season, Music Matters examines the acoustic properties of wood in the construction of concert halls. Here, you can listen as contributors "knock on wood" in England, Wales and Finland, and visit six locations where wood has beaten steel, concrete and glass to produce some of the most rewarding acoustic spaces for musicians and audiences to enjoy around the world. 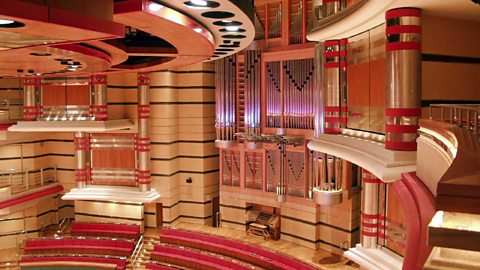 Birmingham’s Symphony Hall opened in 1991, and has been critically acclaimed as Britain’s finest concert hall. Like Vienna’s renowned Musikverein, the auditorium is laid out in the traditional “shoebox” shape which – whether in intimate venues such as London’s Wigmore Hall or larger spaces such as the Concertgebouw in Amsterdam – is thought to help establish an ideal balance of reflective surfaces for perfect acoustics.

Notwithstanding the extensive use of wood in the auditorium, halls that are perfect for music are not necessarily ideal for speech or other uses. Birmingham’s acoustics can therefore be altered by means of a reverberation chamber – a 12,700 cubic metre void equivalent to about 50% of the volume of the Hall is exposed by a series of huge, concrete doors which can be adjusted to create the required degree of "echo". An acoustic canopy suspended above the stage can be lowered to about 10 metres above the platform, effectively creating a smaller space to focus the sound of a small number of players or speakers. Photo Mike Gutteridge courtesy THSH Birmingham.

The Angelika Kauffmann-Saal in Schwarzenberg, Vorarlberg/Austria is the home of an annual international Schubertiade. 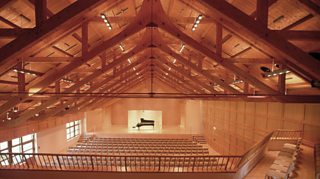 The hall is named after the Swiss-born 18th-century neo-classical painter whose family were closely associated with the town and who was one of the two female founding members of the Royal Academy in London in 1768.

Extended and thoroughly renovated in 2001, the hall is built out of fir and beech wood from the region. The Frankfurter Allgemeine Zeitung rates the hall among the three best chamber music venues in Austria: Die Welt puts it on a level with London’s Wigmore Hall.

“Sitting in the audience is like sitting in a musical instrument,” reported the Dallas Morning News. “The sound has a deep resonance and clarity, heightening chamber music in the way the Bayreuth Festspielhaus transforms opera.” Photo courtesy Austrian Tourist Board. 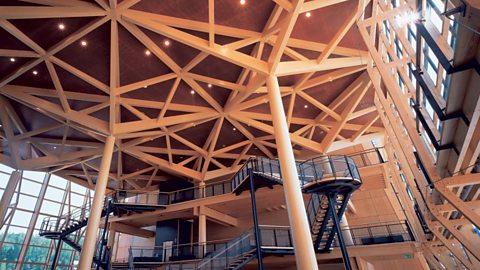 Sibelius Hall in located by the beautiful Lake Vesijärvi in Lahti. It was completed in 2000 – the biggest public wooden building constructed in Finland for over a hundred years – and is the home of the Lahti Symphony Orchestra.

Its acoustics were designed by Artec Consultants, New York, the company founded by the late Russell Johnson who also drew up the innovative acoustic design for Symphony Hall in Birmingham – like Birmingham, the Hall is laid out in "shoebox" format and also has Birmingham’s acoustic doors and movable stage canopy.

The main hall’s floor is oil- and heat-treated smoke birch parquet. A glass façade covers the massive wall elements, with sandwich-structured laminated veneer lumber panels (“glulam”), filled with sand and mineral wool. All of the venue’s load-bearing structures are made of glulam.

Architects Kimmo Lintula and Hannu Tikka explained that the main source of inspiration in the design was the Finnish forests. “The forest had always provided our ancestors with nourishment and raw materials, but it also involves mythical memories and scents – it has a relaxing essence.” Photo courtesy Sibelius Hall, Lahti.

Glyndebourne is an English country house in the Sussex Downs, the site of an opera theatre which, since 1934, has been the venue for the annual Glyndebourne Festival Opera. 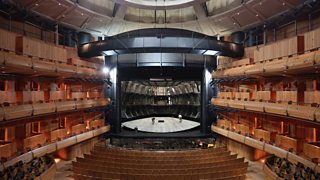 In 1987, George Christie, son of the founder John Christie, recognised that the old theatre built by his father could no longer accommodate ever more technically demanding productions, and was also struggling to meet the public demand for a limited number of tickets.

Among the stipulations for a new theatre were that the acoustics had to be as good as could be found anywhere. By 1994, and at a cost of £30m, the new building – the first purpose-built opera house to be constructed in the UK since John Christie’s original theatre of 1934 – was ready.

The horseshoe-shaped auditorium is crafted out of century-old pitch pine, fashioned into elegant curves: lit by small lamps, it gives off a warm glow. “The shapes of the interior are acoustically proscribed,” say the architects Michael Hopkins and Partners. “It is the final instrument, literally a music box.” 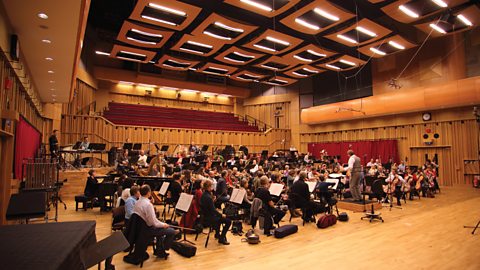 Hoddinott Hall (2009) is named after the late Welsh composer Alun Hoddinott; it is the home of the BBC National Orchestra of Wales and forms part of the Wales Millennium Centre in Cardiff (2004).

The Centre itself makes extensive use of natural materials. Architect Jonathan Adams forecast that “oak, ash, beech, sycamore, alder, birch, chestnut and cherry woods from renewable sources in mid-Wales will be used together in proportions that reflect their relative availability from the forest.

Of the Hoddinott Hall, architect Tim Green said that while the exterior was designed to be in keeping with the existing Wales Millennium Centre, the interior had a theme all its own: “The timber treatment at low level is very reminiscent of Victorian chapels.”

The Hall, which has an acoustic ceiling reflector, is finished in sitka spruce, oak and steamed beech, chosen for its warmer, darker colour as television broadcasting, and performance lighting levels have the potential to “whitewash” a space. The design won a special Wood Award for "best use of panel products" in 2009.

Located in historic downtown Kansas City, the Kauffman Center for the Performing Arts was designed by Safdie Architects, and opened in 2011. 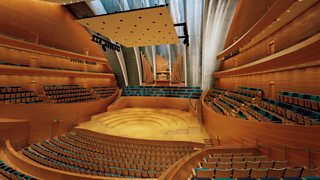 Within it, the 1800-seat Muriel Kauffman Theatre is complemented by Helzberg Hall, a 1,600-seat concert space with a thrust stage. This is made from Alaskan red cedar, with the walls panelled in vertical grain Douglas fir. The architects chose rift red oak flooring to complement their dramatic design. Frank Miller Lumber, who supplied the 34,000 square feet of flooring required, commented that “straight-grained quartersawn hardwoods tend to expand and contract in thickness, not width, virtually eliminating warping, twisting and cupping.”

The Hall also houses a 79-stop, 102-rank pipe organ built by the Canadian firm of Casavant. The design and use of natural materials in the façade and pipework complements the design of the auditorium.

Reporting on the opening of the building, the New York Times noted that “Helzberg Hall is spectacular, with an astonishingly warm, present sound”. Photo © Tim Hursley/Kauffman Center

Music Matters takes a look at how important timber is to the acoustics of the symphonic concert hall, connecting the contribution of nature to music. Listen to the programme.