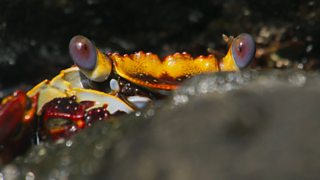 On the tropical shores of Brazil, every day as tide drops, thousands of Sally Lightfoot crabs trek down the shoreline to feed on seaweed-covered rocks. Their name refers to a famous Caribbean dancer and they do indeed seem to dance across the rocks while avoiding the rock pools. Not only that, they are so swift they can run across the sea water itself. If they slip, and fall in the water, they flail their legs desperately to escape back to dry land. They seem to hate getting their feet wet – and there is a good reason why. Moray eels predate on Sally Lightfoots, and were said to even launch themselves out of the sea, to grab them off the rocks.

We hoped to film them being ambushed, but to do so we would have to follow them across the receding shoreline. We were lead by our guide Joao Krajewski who had told us about this remarkable predator who lurks in wait for them.

The rocks were so slippery that carrying heavy and expensive camera equipment fast enough to reach the action, was going to be one of our biggest challenges. So the team divided up - out in front was Joao, who could scamper with confidence across the lethal slimy rocks, just like our crab stars. He would detect the predator by the splash left behind as it attacked, and called the crew in. 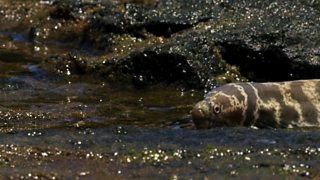 Following him would be the quick response team of cameraman Dan Beecham with his camera, fitted with a short lens and slung over his shoulder, accompanied by assistant producer, Will Ridgeon. On arrival they would throw down a beanbag, jam the camera on top and start filming.

Bringing up the rear would be cameraman Rod Clarke carrying the camera with a long, heavy lens while I brought the heavy tripod. In this way the first pair could get to the predator quickly, to get wider shots of the action, while the second unit could set-up to film in closer detail. Only by applying this strategy were we able to get so many attacks on crabs and sometimes even shoot the behaviour on two cameras at the same time.

The attacks were as dramatic to witness as we had been told. The metre long eels launched themselves like missiles from the water. Even more impressively, the eels would leave the water in pursuit of their prey, slithering over rocks between rock pools. 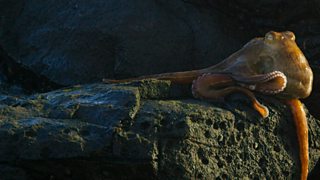 Overall it was a miracle that the team and cameras survived unscathed for 3 weeks on a slippery wave-washed beach, as we rushed to film the action, often only inches above the breaking waves.

But while filming the crabs we were also taken by surprise. Walking past a pool I was grabbed by 8 tentacles covered in suckers that exploded from the water. Octopus were also hunting crabs so any movement above triggered their attacks – even on something 6 feet tall. Their enthusiasm for attacking us allowed us to pinpoint their positions and so we were able to film them attacking crabs as well. So we ended up with two predators for the price of one. 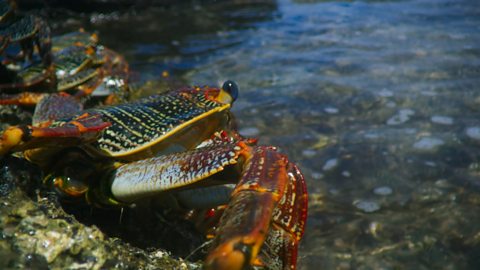 Octopuses and moray eels crawl across dry rock to set their ambush.