In the intertidal zone, between land and sea, three remarkable sites along Wales' largest bay tell a story in time and space. Arresting visual imagery provides the backdrop for a poignant dance meditation on climate and the impact of people. Amser-time is a short film for Dance Passion 2022. 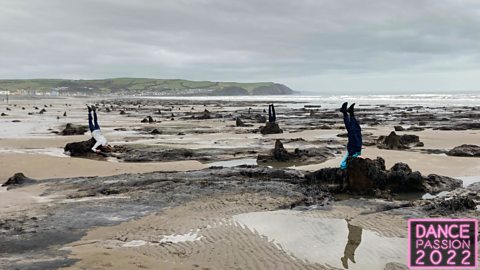 Moving through time along Bae Ceredigion/Cardigan Bay we arrive at today's climate crisis.

In the intertidal zone, between land and sea, three people move through time along Bae Ceredigion / Cardigan Bay, through three remarkable sites. With arresting visual imagery, we start 20,000 years ago and arrive at today's climate crisis.

Borth’s forest is cited as supporting the Cantre'r Gwaelod legend of lost fertile lands in Cardigan Bay, but the geology tells a different story.

Sarn Gynfelyn is revealed every low tide and looks like a road into the sea. In fact, it is a glacial moraine laid down 20,000 years ago when ice sheets melted; it marks the beginning of the global conditions that have enabled human expansion.

At Borth a 6,000 year-old forest flourished for a few thousand years. Submerged by the sea, it has since been re-exposed by recent storms. Sarn Gynfelyn and Borth’s forest are cited as supporting the Cantre'r Gwaelod legend of lost fertile lands in Cardigan Bay, but the geology tells a different story.

Moving forwards, we arrive at Fairbourne, a seaside town built on saltmarsh and English industrial wealth. It is now set to become the first UK town to be decommissioned due to sea level rise. It will be demolished and returned to salt marsh, and will have existed for less than 200 years.

Film by Light / Ladd / Emberton in collaboration with Culture Colony, accompanied by an original sound score by Sion Orgon.

Part of Dance Passion, a celebration of dance on the BBC during February and March 2022.

What is Dance Passion?

This is one of fourteen short films and interactive projects that explore innovative ways of capturing and experiencing dance, as part of Dance Passion - a landmark celebration of the world-class dance throughout February and March 2022. BBC Arts, in partnership with One Dance UK and supported by the Arts Council, bring you unique perspectives on the creative forces in dance, and spotlight innovation in choreography and performance. 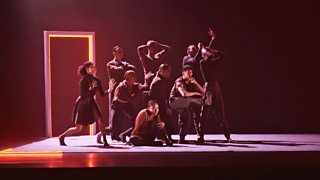