A day in the life of three master craftsmen from Iran, Uzbekistan and China

How their daily routines compare with our own

Exotic locations, beautiful objects and a series of unique people and cultures combined to make this trip a rare opportunity to travel in the footsteps of the ancient makers of this famous Silk Road trade route. 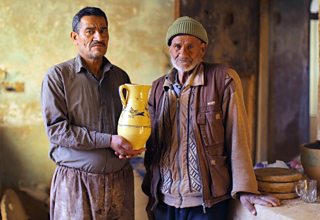 I wanted not just to capture the making process in all its step-by-step detail, but also to convey the character, personality and lives of the people who made the objects — rooting them in the place and people of their making.

Every one of my subjects’ days followed roughly the same pattern: morning work with tea breaks, an hour’s lunch break, then continuing to work until darkness. Just the same as our day really.

As it was winter, they worked until about 6pm.

But where they differed from us was in the way they worked — often outside or in their own personal studio spaces and always with their hands.

Everyone I filmed employed little, if any, pieces of modern equipment or technology and no one wasted any time on computers or mobile phones.

Lunchtime also differed from ours in the west.

I was struck by how silent their working day was - the only noise often being just from the crafting process itself.

Each craftsman sat down with his extended family for a proper meal, lovingly prepared by their wives all morning.

Everyone I met either worked within their home or within a ten minute radius of it. So, at lunch, we followed them with our cameras all the way to their dining rooms and filmed them having lunch.

British families hardly ever eat together at night, let alone during the day!

For a few dollars a week...

Life for the potter I filmed was hard; I really felt for him and his family.

Business was not good and he told me he only earned a few dollars a week. Cheap imports from China and Turkey have really squeezed the domestic pottery trade in Iran.

Friday, however, was his busiest day as it was holy day and locals would come by looking to buy their pottery. 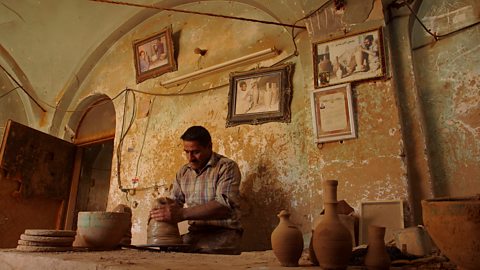 How do you turn local mud into clay with just one machine?

The potter lists the different types of pottery his workshop produces.

Filming on the Silk Road

Working with contributors who didn’t speak my language, whilst operating a camera and directing, was quite challenging at times! But the more time I spent in the company of the local people, the more I got a sense of their lives.

The most memorable thing I filmed was in Khiva, Uzbekistan.

Our location was in the old walled part of the city, a site of pilgrimage for young couples about to get married. They would come with their friends and hold a pre-wedding street party, dancing to loud Uzbek pop music blasting out from a local CD seller’s tinny speaker. This happened 5-10 times a day while I was there — much to the delight of a lone Japanese tourist who hand-clapped each new party and shook the bride and groom’s hands enthusiastically.

I have no idea how my woodcarver put up with all the noise everyday, but he didn't seem to mind and told me he even joined in with the dancing on occasion. 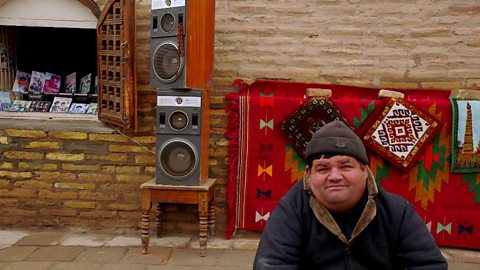 Khivans celebrate a wedding next to the carver’s workshop

In our globalised era of mass-produced cheap consumer goods, the livelihood of many traditional craftspeople across the planet is coming under increasing threat. 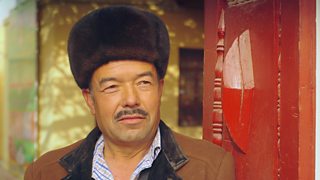 I found it both humbling and a great privilege to observe at close quarters these makers, each having dedicated many years of their lives to the simple art of making things by hand.

Each object I filmed carries with it the fingerprint of their maker, and the mark of their place.

I think there is something very special about this.