At first she was shocked by the coldness of the air and the speed at which her body fell through it. 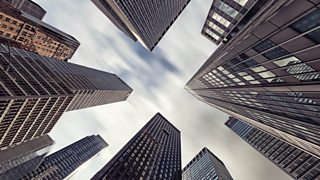 By floor fifty-four she was drifting in and out of consciousness like a cat curled up around a fireplace.

All her fears had faded and as she plummeted downwards, one by one her senses tuned out.

She could no longer hear the buzz of traffic below or the rush of wind in her ears. Karen was as close to being at peace as one could be at sixty miles per hour.

Then, at floor thirty-nine, her phone rang.

She might have laughed if the air wasn’t being knocked out of her.

She was the grumpy middle-aged woman who told kids to turn off their phones in the cinema.

She was the one who tutted audibly when a mobile went off in a meeting. She’d rather send a letter than a text message; most of the time her phone was stowed away in a drawer, out of charge.

But now of all times it had to be tucked in her suit jacket pocket, switched on and playing the most infuriating ringtone; a 2 bar jingle from the ‘90s consisting of cheerful beeps and boops.

If it didn’t smash on impact, there was a chance it would still be playing as blood pooled around her body and the first horrified passersby approached. She could only hope they didn’t feel the urge to dance.

Somewhere out there, Karen suspected, was a man hoping to sell her double-glazing, or perhaps a toddler who had got hold of their parent’s phone and pushed numbers at random.

The few friends she had knew they had a better chance of winning the lottery than having her respond to a call.

It could be her dad- he rung sometimes to check up on her, ever since he’d found the pills in her bathroom cabinet.

He’d thrust them in her face like someone making a dog stare at its own shit in a fevered hope that it would see the error of its ways.

In truth she had never felt more like a child than in that moment.

In truth she had never felt more like a child than in that moment.

For now, all Karen could do was squeeze her eyes tighter shut, try to ignore the ringtone and try to remind herself that falling meant freedom; dimly aware that time was passing and she had barely seconds left.

She waited for the smack of concrete, the crunch of bones, the burst of pain. But they never arrived.

Karen knew that for a gazelle close enough to smell a lion’s breath, for an ant staring up at the sole of a shoe, for any creature experiencing its last living moments, time surely stretched. But time wasn’t stretching for Karen, it wasn’t stopping either.

It was simply that, at floor twenty-two, Karen had ceased falling and was hanging suspended mid-air.

This wasn’t supposed to happen. She was supposed to fall, and keep falling, then, in the blink of an eye, cease to exist.

Yet here she was, weightless, spread-eagled and floating, gazing up at a bright sky dotted with candyfloss clouds.

Karen reckoned she was probably dead. She resigned herself to waiting for something to happen.

Any second now an angelic hand would take hold of hers and lead her slowly upwards, or perhaps her vision would gradually fade into darkness and she would feel her soul drift away.

She just wished her phone would stop ringing. It was the only thing disturbing the utter tranquillity of the moment. She would wait for it to stop.

The clouds moved leisurely eastwards, pushed by a gentle breeze. Birds flew by, in silhouette against the sun. Night came and the air grew cool. Stars appeared, so bright and so numerous they practically lit up the sky. Perhaps days went by, perhaps years.

Time lost its meaning at floor twenty-two, and still the phone rang on.

The thought came to Karen that it might be God on the other end. He might be a little peeved at having to wait so long for an answer.

Even so, she wouldn’t hesitate to give him a piece of her mind. Oh the things she would say.

Karen pulled the phone from her jacket pocket, vaguely wondering what would happen if she dropped it; whether it would plunge downwards or remain afloat in her curious little bubble.

She didn’t try to find out, not wanting to lose her chance to talk with the apparent creator of her torment. Instead, she pressed the button the answer the call.

The voice was familiar, and not faintly godlike. It was timid and gentle and reeked of concern. Some unproven dinner party fact she had heard years ago came to mind: if you were to see your clone on the street you wouldn’t recognise them.

“Karen?” It asked again, as she hadn’t responded.

“You’re not Him, are you.” The words barely escaped her, they trembled in the wind.

There was a long silence as a breeze enveloped her.

“I don’t know. But the hows or the whys don’t matter.”

“Then what does?” She was practically pleading, begging for some sort of answer in amongst the mess of life and death and dreams.

She burst out a pathetic laugh, “It’s a bit late for that.”

“You’ve got to promise me you won’t jump.” It was her pleading now; this voice in the void with a lump in her throat.

Curling her legs up to her chest, Karen allowed herself to revolve slowly in the air; tears flowing freely as she desperately whispered the only question that really mattered. The question that had pushed her to the edge and over it.

“Why did he have to be taken from me?”