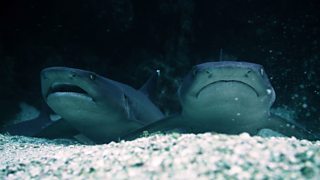 the Jekyll and Hyde of sharks

A specialist in capturing reef fish in coral caves and crevices.

Commonly found in waters around coral reefs in the Pacific and Indian oceans.

By day these placid sharks are often found in numbers lying motionless on the reef and are common sites to divers. Harassed by local sea lions and a scratching post for meandering fish, they seem harmless. But by night, they transform into ruthless hunters, scouring the reef in packs in search of their prey. All of their senses are perfectly tuned for the hunt. Electroreceptors on their head detect the faintest of electrical signals, as small as a millionth of a volt - the heartbeat of a scared fish. They can even smell the odour given off by a distressed fish! With all of this sensory information, their prey stands little chance of going unnoticed. Even fish that are tucked tightly into cracks and crevices in the coral are a target, as the shark’s slender body allows it to squeeze into impossibly small holes. Other members of the pack will block off any escape routes, so once targeted the fish stand no chance of escape.