Which types of exercise benefit from caffeine?

Research has shown that caffeine can improve athletic performance by a small but significant 3%. 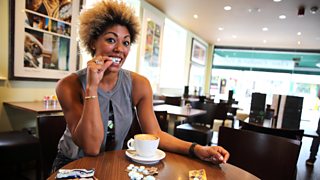 However, not all types of exercise will benefit. This is due to the way caffeine works in your body. Contrary to popular belief, it’s nothing to do with increasing blood flow to your muscles by getting your heart pumping faster. In fact, the main benefit of caffeine comes from its effect on your central nervous system.

As you exercise your body produces a chemical called adenosine which makes you feel tired. Caffeine blocks the adenosine receptors in your nerves, so your brain perceives less pain and fatigue. This process allows you to keep going longer, so caffeine is especially useful for one particular type of exercise: endurance sports. So, if you’re into long-distance running or cycling, caffeine might improve your performance.

However, judging the optimal amount of caffeine to take in order to benefit from this effect is not straightforward.

A scientifically-established optimum amount is 3 milligrams per kilogram of body weight. That’s between 1 and 2 large cups of standard filter coffee for an average man or woman. If you don’t like coffee, you also get caffeine in tea, cola, chocolate and some sports drinks, but the caffeine content of these products is rarely stated on the label, so working out a precise dose is difficult.

As well as dose, timing is important. Caffeine will go on working for a few hours after you’ve taken it, but needs to be ingested at least an hour before exercise.

A more precise way to achieve the right dose at the right time is to use a relatively new type of caffeine-containing product: caffeine chewing gum. This gives far greater control over both dose and timing, and can deliver 80% of the caffeine to the bloodstream in as little as 5 minutes. Caffeine gum is currently used by some professional sports teams. As caffeine is present in so many products, it is currently not banned for use in sports.

However, a well-known effect of caffeine is to make you jittery, so it's counter-productive for sports where hand-eye co-ordination is crucial, such as snooker, archery or golf. Another significant drawback is that the more you use it, the less effective it will tend to be. So if you intend to use caffeine for physical performance and wish to avoid building a tolerance to it, it might be best kept back for the occasional big race, rather than used regularly.