The decaying concrete ruins of St Peter’s Seminary complex have long divided opinion – brutally ugly monstrosity or Scotland's lost architectural masterpiece? But for decades there has been one certainty – the site has been steadily collapsing to rubble. Now, with its future secure due to the grant of a £4.2 million renovation fund, author CRAIG ROBERTSON pays a visit to this controversial piece of Scottish heritage.

For 30 years, one of the world’s most architecturally important buildings has stood neglected on Scotland’s west coast, falling inexorably into disrepair.

Yet, perversely, the ruination of the former St Peter’s Seminary at Cardross has only enhanced its legend and its sense of presence.

It became a temple to graffiti artists and a playground for urban explorers, giving free rein to the imaginations of both

This remarkable concrete citadel of modernism was designed by renowned Glasgow architects Isi Metzstein and Andy MacMillan to train student priests in the solitude of the Clyde coast.

However, it served in this intended capacity for only a few years as the church changed policy and student numbers dwindled.

It stayed in the business of saving souls by becoming a drug rehabilitation centre for a short time until that too closed its doors and the building was abandoned.

Over three decades of neglect, it became a temple to graffiti artists and a playground for urban explorers, giving free rein to the imaginations of both.

It was ravaged by fire, theft and vandalism, attacked by rhododendron and asbestos, finally being brought to its knees by the unrelenting onslaught of the Scottish weather.

Now, almost exactly 50 years since it was built, the building has been reborn as the venue for Hinterland, a public arts project as daring and innovative as the building itself.

Under the leadership of NVA, a company dedicated to reaffirming people's connection to their environments – natural and man-made – they intend to rebuild the chapel and much of the rest of the building to original plans, albeit with more modern and more suitable materials.

The £4.2 million in funds secured from the Heritage Lottery Fund and Creative Scotland will enable this renovation while also stabilising the more ruined structures to maintain their existence.

Hinterland is a chance for the wider public to glimpse what this building was, what it has become and what it might yet be. I got the chance to look behind the scenes and jumped at it.

I visited with a family friend, the filmmaker Jonathan Metzstein, and we both had our reasons for wanting to explore.

The seminary features in my latest book, In Place of Death, which revolves round the shadowy world of urbexing, the pursuit of exploring abandoned and disused sites. Jonathan is Isi Metzstein’s nephew and a huge admirer of his work. 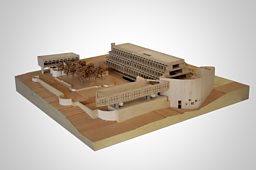 From the BBC archives 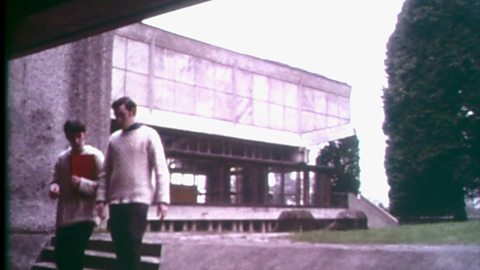 Behind the scenes of St Peter's Seminary

Footage of the Brutalist building from a 1972 BBC documentary, To Be a Priest.

NVA's video history St Peter's Seminary and the plans to restore it. 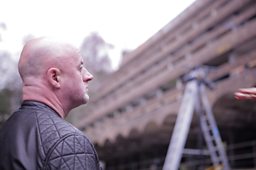 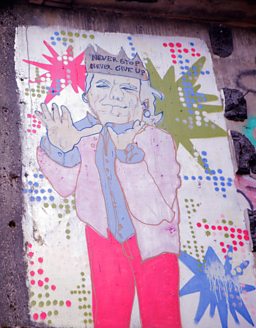 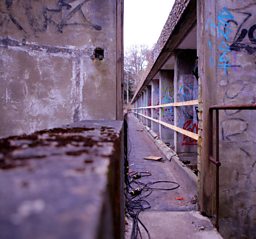 Graffiti on the ruins of St Peter's Seminary, Cardross. Photo by Jonathan Metzstein.

Even though you know it is there, it still comes as a surprise when the brutal structure looms out of the Kilmahew woods.

It is immediately shocking, this concrete monolith set amongst the green. There is a surreal sense that it both should and shouldn’t be there. It is at once part of the surrounding environment and yet alien to it.

The first impression is of it being both ancient and modern, part Mayan ruin and part rundown council scheme.

The building overwhelms your senses. Large, foreboding and stark outside, it is a maze of decay, inventiveness and surprises inside.

Everything is plastered in graffiti that seems to belong. At its edges, it is at one with nature and the lines between ownership are blurred.

This is a battered and pillaged masterpiece, a weather-wrecked ruin

NVA, under the loving eye of its creative director Angus Farquhar, have skilfully returned the seminary to a netherworld somewhere between its creation and the unnavigable urban jungle that it had become.

It has revealed stunning details that hadn’t been seen in decades – like the floating concrete slabs in the teaching block and the fabulous cobbled path outside it – but has retained the edgy, anarchic feel of its desertion.

This is a battered and pillaged masterpiece, a weather-wrecked ruin, yet it maintains a serenity and – even to a heathen like myself – a spirituality that is undeniable. It is brutal and yet it is beautiful.

As someone with an interest in but no real understanding of architecture, I can only wonder at the ability to conjure up such grace and romance from a material as ugly and functional as concrete.

One of the most contentious debates about this place is its setting, with many unwilling to accept its Brutalist design within the semi-ancient woodland that envelops it.

The two were certainly at odds but the years of neglect had let the balance shift in favour of the surrounding wilderness, reclaiming the building for its own before the restoration work began.

Now, for me, the two are at peace, both having won battles in a long war.

St Peter’s has had a tempestuous life and the scars of that are clear in the spirit of the place. You can see and feel its suffering – and the building is more remarkable for that, not less. 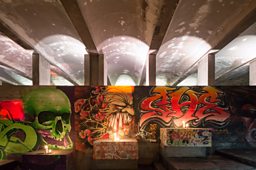 Graffiti on a wall at NVA's Hinterland. Photo by Alan McAteer. 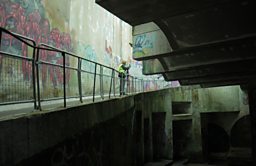 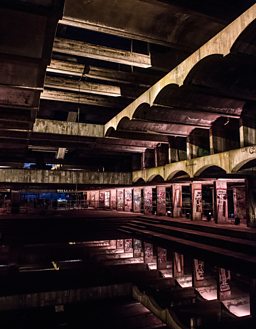 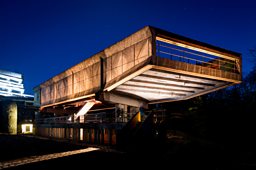 NVA's Hinterland as seen at night. Photo by Alan McAteer. 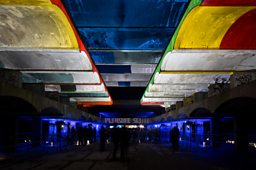 Interior of St Peter's Seminary lit up at the launch of Scotland’s Festival of Architecture 2016. Photo by Alan McAteer.

A view over St Peter's Seminary. Photo by Jonathan Metzstein.

The visit to Kilmahew was overwhelming for me, my only real connection being some words on the pages of a book, but it clearly proved extremely emotional for Jonathan.

The best and worst of modernist Scottish architecture. It inspires love and hatred in equal measure

He explained it being as if he’d been walking through the labyrinthine mind of his beloved uncle and seeing his thoughts and beliefs made real. It had a profound effect on him.

Actually, if this building does not have an effect on you – whether you love it or hate it – then I suggest you see a doctor. It has a power to shock, to move and to divide opinion.

I asked for descriptions of it from Angus Farquhar and from noted architect and novelist David Ross.

Their replies echoed each other’s and also summed up the conflicting emotions the buildings stirs in the breasts of those who care.

"The best and worst of modernist Scottish architecture. It inspires love and hatred in equal measure. Contentious. Brilliantly bold and adventurous. Heroic and flawed. Genius."

No one, not even those who love it, can quite make their minds up about it. But one thing is clear, this is the last chance to save it - and that chance must be taken so it can be argued over by those yet to come.

Events at Hinterland run from 18 to 27 March 2016. Craig Robertson's latest crime thriller, In Place of Death, is published by Simon & Schuster. 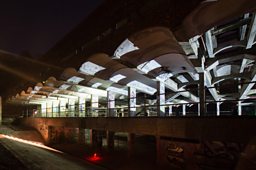 Impression of an art event at a renovated St Peter's. James Johnson, courtesy of NVA.