Director Julian Farino and actor Gemma Jones talk about the real-life individuals that inspired the script, and why the Marvellous experience was a special one.

Julian Farino: "The real inspiration of Neil is that the way he lives his life is a great example to us all of how positivity brings rewards"

Julian Farino is the director of Marvellous. He has directed extensively for the BBC and for HBO in America. He won a BAFTA for the Charles Dickens adaptation Our Mutual Friend and received several Emmy nominations for his work on Entourage, How To Make It In America and Newsroom. He recently completed the feature film The Oranges with Hugh Laurie, and directed the factual television series 7 Up New Generation. 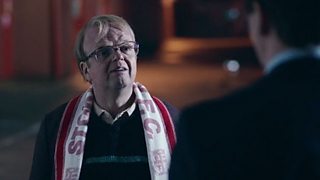 I am cautious about committing to projects a long way in advance, but with Marvellous I signed on immediately
Director Julian Farino

This is your first UK drama since returning from a very successful career in the US. How did you get involved with Marvellous and what drew you to the story of Neil Baldwin?

Patrick Spence (executive producer) sent the script to me a year before we filmed - before I had moved back to the UK – and I loved it! I am cautious about committing to projects a long way in advance, but with Marvellous I signed on immediately.

I loved its originality and most of all its spirit. It wasn't just a great, improbable story, but a celebration of positivity, which - in cynical times - felt like a great thing to do. I had also previously worked with writer Peter Bowker on Flesh and Blood and knew that we were good partners on unusual journeys!

How did you choose which aspects of Neil’s life to dramatise?

Peter [Bowker] had chosen most of this already. No writer would overlook the chance to include life as a circus clown or a kit man at Stoke City! What was a more shared venture was to establish the tone, given the unusual form of the story, and to address the balance between real life and the dramatisation of events. Pete's real inspiration was the invention of the ukulele choir, which fitted in with the idiosyncratic nature of the story and helped to bind it.

Was it Neil’s idea to appear alongside Toby Jones’s character version of him?

No, that was Pete's too! The idea to include Neil might have come from our experience of using real characters in Flesh and Blood, but the main idea was to show that this story came from a reality and wasn't meant to be a ‘Forrest Gump for the Potteries’. During rehearsals and filming, we adjusted the scenes with Neil by instinct. We got to know him very well since he was always on set with us!

Do you think there are any lessons to be learned from the way that Neil approaches life?

Yes! The real inspiration of Neil is that the way he lives his life is a great example to us all of how positivity brings rewards. It's a wonderful vote for a 'glass half full' approach to life. I think the film is meant to make us think about ourselves as much as to marvel at Neil's story.

Let’s hear about the cameos. How did you get Lou Macari and Gary Lineker to appear on screen?

Lou has such a genuine affection for Neil that he was a willing and helpful collaborator from the start. He’s a ‘top man’, to use his own expression. Gary is very smart - he read and loved the script - and made time to appear in the film.

What was your objective in representing disability in drama? And what challenges did you face?

We wanted to be inclusive, to be positive, and in terms of representing Neil as someone with learning difficulties, to celebrate - both his character and his great story.

Gemma Jones: "It was a very touching, funny, humane and beautifully written script"

Gemma Jones stars as Neil's mother 'Mary' in Marvellous. Gemma is a screen and stage actress and has appeared in a number of iconic British films. She starred alongside Kate Winslet, Alan Rickman and Emma Thompson in the Academy Award-winning Sense and Sensibility. She has also starred in the Bridget Jones and Harry Potter film franchises.

What attracted you to the role of Mary?

The script - even before I understood it was based on fact. It was a very touching, funny, humane and beautifully written script.

Can you identify with her concerns for her son?

I can indeed as I have a grown up son. A maternal instinct is always amazingly strong and protective.

Did you meet with Neil befor you began filming?

Yes, I met him at the read-through and was very aware that I was portraying his mother, but he was very kind!

How does this role compare with others you have played?

It's one of the best. A strong, brave woman with a huge heart. It was a privilege to play her.

How was your experience working with Julian, Toby and Neil?

It was a treat. Julian is a wonderfully observant and detailed director and it is very easy to love Toby. It was a happy shoot and Neil was very encouraging and generous in allowing our intrusion into his life. I hope we do him justice!