Is Manuka honey worth the money?

Manuka honey has become increasingly popular in recent years, and can be very expensive. It tends to be sold as having health benefits - but what is the evidence for these? 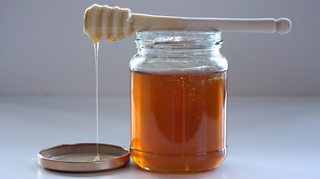 Manuka honey originated in New Zealand, and it is made from nectar collected by bees that forage on the wild manuka tree, which give it a distinctive flavour. But what about its supposed health benefits?

Most honey is believed to have some bacteria killing properties because it contains chemicals that produce hydrogen peroxide. However, in 1991 a study from the Honey Research Unit in New Zealand showed that when you remove the hydrogen peroxide from a range of honeys, manuka was the only type that kept its ability to kill bacteria. This is due to the presence of a unique ingredient, now identified as methylglyoxal, which has specific antimicrobial properties.

In response to this discovery, jars of manuka honey began to be marketed bearing a UMF number – "Unique Manuka Factor" – relating to how many bacteria the honey could kill once the hydrogen peroxide had been removed.

The labelling on jars has, however, caused some confusion. As well as the UMF rating, some jars display MGO, (methylglyoxal) which equates to the same sort of measurement, while others show NPA or TA. The NPA (non-peroxide activity) rating is similarly founded on the level of methyglyoxal the honey contains once the hydrogen peroxide has been removed. TA is instead the total activity, so this includes the hydrogen peroxide, which is present in normal honey. At the same time, some jars can be found with ‘Activity’ or ‘Active’ next to numbers, while some just have numbers alone with no explanation as to their justification.

The Ministry of Primary Industries (MPI) in New Zealand has released its own voluntary labelling guidelines.

What about its medical properties?

In terms of honey being used as a medicine, 'medical grade honey' is licensed around the world for wound care treatment. There have been many recent research developments stemming from Cardiff University which have shown honeys in general, and particularly manuka honey, as effective with chronic wounds and MRSA (antibiotic-resistant infection).

However, it is very important to note that any honey used in this capacity will be medical-grade honey with the impurities removed: you should not apply any honey to your wounds at home.

Instead, many people buy it thinking that it might help with sore throats, gut problems or even allergies. So what is the evidence for these benefits?

There is not enough evidence that methylglyoxal survives being eaten, nor that it does any good inside the body. This is not an area in which a lot of independently-funded research has been done, but although there is as mall bit of evidence that in general honey can soothe a sore throat, there is not yet conclusive evidence to suggest that eating shop-bought manuka honey will be any more effective at this than a cheaper alternative. Similarly, there hasn’t been robust conclusive evidence to show it can be used to ease indigestion.

So, although some people will swear by its properties, this has not been backed up by clinical trials.