Radio 2 has always been a big supporter of theatre, around the country, on Broadway and in London's West End. Now in their 61st year, the annual awards celebrate outstanding achievement and performance in London theatre. 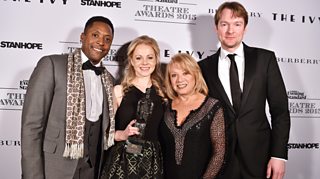 Listeners have voted for the Radio 2 Audience Award for Best Musical as part of the 2015 London Evening Standard Theatre awards.

And the winner is - Kinky Boots!

Listen back to the announcement in Clare Teal's show.

"I'm so happy that listeners to my Sunday afternoon show will decide the winner of the Radio 2 Audience Award Best Musical at these special awards.

This is an incredible shortlist with so many of my favourite hit London shows from the past 12 months. It’s going to be such a difficult task for the listeners of BBC Radio 2 to pick a favourite!"

Listen to highlights of the awards, with backstage interviews and reporting from the red carpet, in a special Radio 2 Arts Show presented by Anneka Rice on Friday 27th November at 10pm.

The five shortlisted musicals were:

Jamie Lloyd’s acclaimed revival of Stephen Sondheim’s 1990 musical, the most politically contentious of his pioneering output, about a group of American presidential assassins garnered five star reviews earlier in the year.

Katie Brayben is the eponymous Carole King in the celebrated show which tells the story of the chart-topping music legend as she journeys from school girl to superstar packed with King’s toe-tapping hits and lyrical ballads.

Based on the 2002 film, Bend it Like Beckham is the latest comedy-musical to smash the West End with its blend of Bhangra and the British obsession: football.

Based on a true story, Broadway’s high-heeled hit has arrived and its infectious celebration of friendship has been winning the hearts of audiences young and old alike.