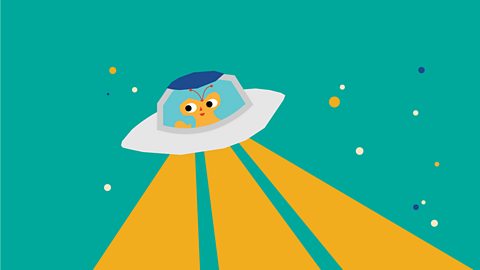 In the middle of the misty, dark winter night a shining space ship zoomed out of the sky spraying multi-coloured sparks everywhere. They were shooting like sparklers as it landed as softly and as quietly as a feather. When it had landed it glinted in the moonlight and little green men started waving out of the octagonal, purple windows. They were as green as dandelion leaves and when they spoke they sounded like little robins tweeting in an old oak tree. Some animals were watching this happen. there was an old wise owl,an orange fox and some scuttling bugs and beetles. To begin with they were so terrified that they started to run away and they hid in their underground houses. From their windows the aliens could only see the grass waving in the wild wind.

The visiting aliens then started to unload some massive grey stone blocks out of the ship. they weighed as much as twenty five tonnes and some were almost nine metres high. They were so heavy that the aliens were struggling to carry and place them down. The creatures who were observing from their hiding places stopped being scared because the aliens seemed friendly. they decided to help them. They called together their millions of friends from all across the world to join them in their work. Together the aliens and all the creatures struggled and trudged with the unbelievably heavy stones. The alien chief told them where to put them. He had a plan. Some were placed vertically and some horizontally on top. They made lots of huge door shapes which together formed a circle that looked like an amphitheatre.

When they had finished, wearily they all sat down together and chirped and sang happily about the good work that they had done. The aliens were grateful for all the help. Later this strange stone circle would be called Stonehenge, but the aliens said that these stones would help them land their massive mother ship later when they come back to Earth.

As they left the aliens waved goodbye and chirped "See you in 2017".