Filming Bobbit worms in the dark 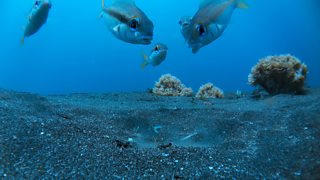 I had been wanting to film Eunice aphroditois, a Bobbit worm, for years. It’s a giant carnivorous worm that can grow over a metre long. With dagger sharp jaws and lightning fast reactions, it sits in a burrow waiting to ambush passing prey. Bobbits will take even large fish and drag them into their underground larder. And it was a conversation with a scientist called Jose Lachat that cemented our belief that the Bobbit was a character Blue Planet II just had to meet – because Jose had discovered that one species of fish appeared to be fighting back against the monstrous worm.

Cameraman Hugh Miller and sequence director Sarah Conner took on the challenge and travelled to Indonesia to film the infamous Bobbit. They had a local team to work with, who knew the perfect dive site. The new behaviour that Jose had described turned out to be happening more often than Hugh could have ever hoped for. He would regularly see groups of monocle bream approaching the Bobbit’s burrow in daylight and blowing water at it. In doing so they seemed to be revealing the Bobbits’ hiding place to each other – which allows them all to feed more safely.

We also wanted to film the Bobbit in hunting mode, to achieve this the team entered the Bobbits’ lair at night. At first, the team tried filming with lights but something about the light was keeping the Bobbit at bay: a new plan was needed. Luckily, Hugh had developed an alternative solution. After a great deal of experimentation over previous years, Hugh had built a one of a kind lighting system capable of illuminating an area underwater that could be detected only by a specially adapted camera and that was invisible to us. So the team would not be able to see anything down there themselves. 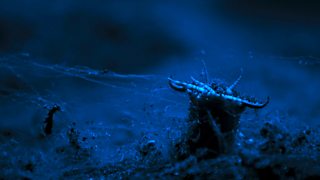 Diving rebreathers, which would allow them to noiselessly sit on the seabed for many hours, they began their stakeout in the pitch black. They quickly realised that the Bobbit was oblivious to their new approach, they had successfully unlocked a window into the Bobbit’s world. By looking through the monitor on his camera, Hugh was able to see the worm and capture truly unique imagery of a Bobbit hunting in the pitch black. But for Sarah, the filming was a time of complete darkness, only aware that there was a giant carnivorous worm close by in the blackness, and quite possibly more of them around waiting for prey to stray too close to their snapping jaws.

Jose has recently published a scientific paper detailing the behaviour of the monocle bream and how they use teamwork to reveal the Bobbit’s hiding place. Our footage of this behaviour and the unique insight into the Bobbit at night are now available for further scientific study. 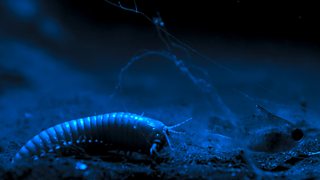 Our shoots make demands on many: from the scientists that lead us to amazing new discoveries; to production coordinators that get us into the most inaccessible places, to cameramen like Hugh that find entirely new ways to image the natural world; to the sheer endeavour and persistence of our crews in the field. I suppose that ultimately the final sequences are a bit like the breams’ behaviour - the culmination of incredible team work.