Footballer, model, global brand and charity ambassador, David Beckham joined Kirsty Young to celebrate the 75th anniversary of Desert Island Discs. But how would the former England captain survive on a desert island? “People are always interested in what’s going on but I’m looking forward to this.”

David keeps match memorabilia, including old football shirts and all of his England caps. His medals are in a bank safe: “They’re so precious to me. They’re for my children in the future.” What about his boots? Staggeringly he has over 1,000 pairs, which more than competes with Victoria’s shoe collection.

He was born in Leytonstone, then moved to Chingford. His first memory is of his mum, a hairdresser, taking him to football practice. His father was a gas fitter who worked long hours but would play football with him after school; he’d tried out for Leyton Orient himself. “He was ALWAYS offside.”

His interest in fashion is well documented and started early. He recalls being asked to be a pageboy at a wedding, aged six. The choice was a sensible suit, or burgundy velvet knickerbockers, tights and white ballet shoes. Guess which he chose? “I’m sure my mum has got that outfit at home,” he says.

David’s mum, dad and his sister Joanne watched him score from the halfway line against Wimbledon in 1996. “I remember the ball falling to me and thinking, ‘yeah, why not?’” As he watched it swerve from left to right, he told himself, “this has got a real chance”. As it hit the back of the net “there was silence, it was amazing.” Eric Cantona came up to him afterwards and said, “What a goal!”, which David found quite overwhelming: “He was a hero of mine”. He recalls Sir Alex Ferguson protecting him from the media, telling him, “Do not speak to anybody. Get on that bus with the team.”

… and THAT goal against Greece

“That was one of the biggest moments for me,” says Beckham, who was celebrating before the ball had crossed the goal line: “That’s happened on a number of occasions… Before it’s even gone in, I’m actually running off.”

David recalls his mum approaching him after a game and saying: “Lucky you played well today.” He had been watched by a Manchester United scout who invited him for a trial. Beckham burst into tears of joy. Not long after, he signed a contract on his 14th birthday in Sir Alex Ferguson’s office.

Arguing with the manager

The crux of the problem with Sir Alex Ferguson was the fact that “there were certain decisions I made then that were wrong decisions,” he says. “I can see why the manager got so frustrated.” There were many misconceptions about his life during that time; people thought he was living in London with Victoria and driving to Manchester to train, which wasn’t the case. The low-point hap-pened after a defeat to Arsenal with Ferguson kicking a boot at Beckham, cutting his eyebrow: “It was a freak accident.” While on holiday in 2003, David found out he was being sold to Barcelona when his friend saw it on TV. He said, “If I am going to move, I want to move to Real Madrid.” He couldn’t watch Manchester United play for three years afterwards. 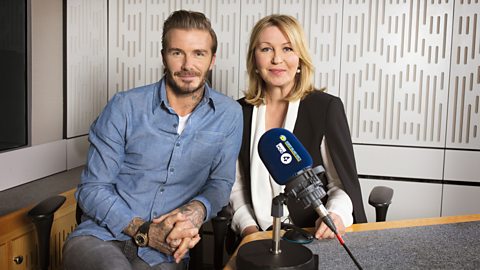 David Beckham: ‘I can see why he got so frustrated’

David Beckham on his relationship with Sir Alex Ferguson.

Beckham Sr, was, according to David, “a bit of a taskmaster”. He would practise football in a local park with his father and a goal with no net. “Hit the cross bar, hit the cross bar,” his dad would say. “I’m a lot softer [with my children] than my dad was with me.” David played for local youth team Ridge-way Rovers on a Sunday morning and his dad would pick apart his game afterwards. The first time his dad told him he’d done really well was when he got his 100th cap for England. “It made me emotional.”

David’s a Unicef ambassador and works with many different charities. “It’s not for vanity,” he says. He recalls going to Thailand for the first time with Manchester United, being invited to a women’s centre and immediately wanting to learn more. He remembers thinking: “I want to get involved, it’s important that I do this.”

He gave Victoria his number in the players' lounge, after noticing her on the TV wearing a black catsuit. “Everyone at the time had their favourite Spice Girl.” They had to have dates in a restaurant car park in David’s bright blue BMW because Simon Fuller, the Spice Girls manager, wouldn’t let the girls go out. He attributes the success of his marriage with Victoria to being “a strong family unit. We had strong parents.” 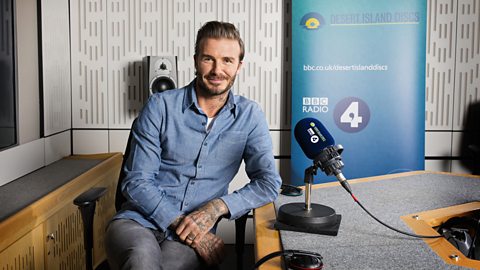 David Beckham: ‘We’d sit in the carpark and talk’

Beckham received death threats after famously being sent off against Argentina in the 1998 World Cup. Alex Ferguson was the first person to call him after the game. “That gave me strength to get through probably the toughest time that I’ve been through in my life.” Victoria had just found out she was pregnant with their first son, Brooklyn. “It should have been a happy time and it wasn’t.”

Elton John makes the cut, but some of his choices are more unexpected: a track from Spanish singer-songwriter Alejandro Sanz evokes his time in Madrid, and a reflective instrumental by jazz star Sidney Bechet reminds him of Paris, where he ended his professional playing career. However, Spice Girls (and his son Cruz’s charity single) didn’t make it into his eight choices, “I might get into trouble for that.”