How does air pollution affect us?

Although we are becoming more environmentally aware, and air pollution has declined in our urban environments, it is apparently still affecting us all. Michael Mosley sets out to find out how.

One problem is tiny particulate matter (or PM) – solid and liquid particles too small to be filtered out by our noses, and which therefore end up going straight down into our lungs. Our bodies have a defence against such invaders – cells called macrophages which can ‘eat up’ these particles and clear them out of our lungs again. The problem is keeping PM levels low enough to ensure that our macrophages can keep up. 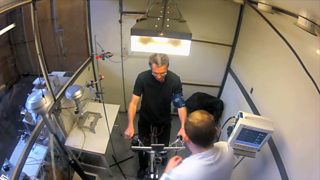 Michael visits Dr Rossa Brugha of Queen Mary University of London, who shows him the PM and macrophages in his own lungs and explains how exposure to too much PM, which is particularly produced by diesel engines, can stress the linings of your lungs. A recent government report suggested that as many as 29,000 people a year die because of breathing in too much PM.

However, by fitting people with personal pollution monitors, Rossa’s team have managed to find simple ways in which we can all reduce our PM exposure when outside:

PM in our lungs can also be small enough to cross into our blood stream and affect our hearts and cardiovascular system. Watch the film above/below to see the effect on Michael as he experiences a dose of heavy diesel fumes.