The six reasons beards are everywhere

In the space of a few short years the beard has made a striking return to British life. Footballers, actors and fashionable hipsters are far more likely to wear some form of facial hair than they were in the recent past. The wearing of a well-barbered, blow-dried and oiled beard is unlikely to raise any eyebrows. The Long View has been talking to some beard experts and has come up with some beard-strokingingly intriguing facts.

1. The (unhealthy?) focus on diet and bodies

As a nation we are increasingly worried about body image. Whilst women's body shape and size has long been under scrutiny in the media, men - particularly Millennials - are under pressure to hone and sculpt a healthy and strong shape. This concentration on the physical attributes of men's bodies has brought a new focus on diet (never far from a protein shake) and muscular athleticism (you're more likely to run into your male work colleague at the gym rather than the pub nowadays). The beard feeds into this as a natural extension of the body and a way to shape the face, elongating the head and creating a strong jaw line.

We are currently seeing a similar pattern emerging to what happened in the Victorian era when beards became all the rage. In the 1850s, women agitated for more power. There were national concerns that British men were becoming more weak. These concerns resulted in a focus on the male body. The beard became almost the emblem of manliness, upheld as a symbol of natural male strength. Today, in an era where the campaign for gender equality sees more women recognised in positions of power than ever before, men are growing strong beards and stroking them for added measure.

The beard revival is very much to do with the idea of a nostalgic version of masculinity. The recession has led to this very nostalgic, backward-looking attitude to fashion. It’s almost as if things seem to be going so wrong on a world-scale at the moment that we are afraid collectively to look into the future. We’re not sure what the future is going to bring us, so we take great comfort in looking at the past because it’s already gone. Vintage has been incredibly popular as a fashion trend. Men are looking backwards to the beard because for them it represents a manliness, it looks back to a time when men were men. The beard is something tangible – it’s something men have to literally hold on to in times of stress. 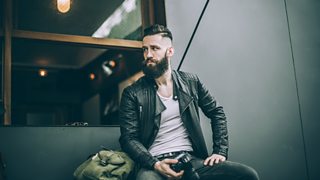 4. The influence of war and celebrities

War is a big influencer on beards. In the Victorian era it was the soldiers returning from the Crimean Campaign who sported magnificent beards. Part of the idea for that campaign was that you put the soldiers sporting heavy beards and moustaches at the front of the marching column to frighten the enemy! When men return from a tour abroad sporting a beard, it has always influenced people.

We aren't quite at the level of the Victorian's love for beards, which included a new range of moustache cups to stop your moustache and beard dipping into your soup course by accident.

Celebrity endorsements always make a big difference in fashion. In Victorian times it was the explorer David Livingstone endorsing beards, but nowadays footballers, musicians, film stars – they’ve all got them. Just look at the Arsenal football squad. Today’s team photo shows 10 bearded players out of 26. Compare that to the team photos from the 1970s or 1980s and there are no beards to be found – clean-shaven all the way. Mighty beards on the likes of actor Tom Hardy or MMA fighter Conor McGregor have helped to bring the beard to the masses.

We live in the era of automation. The workplace has changed dramatically, the idea that masculine jobs are suited with physicality has disappeared. Men somehow feel that they need to survive, be strong and capable, and use their bodies. Because many men aren’t using their bodies in everyday work sitting in meetings or in offices, they’re demonstrating their capability and strength through fashion. When you look around in the U.K. you’ll see many men wearing huge boots, jeans, shooting jackets, plaid shirts – they look as if they should be in a mountain cabin in Oregon about to go out and shoot a moose, but instead they’re just nipping out to Londis. The beard is very much part of this – it’s a symbolic way of showing that you can survive any crisis, including the overwhelming lack of trees to chop.

There is an underlying idea that it’s more authentic to have a beard. The return to the hairy man after the carefully coiffured hair and fake tan trends was an inevitable change in fashion. There is a fascinating ambivalence towards hair in culture. Some people fear it when it grows in armpits, some find it disgusting, yet some men can grow an epic amount of it on their faces and that can be acceptable. We fear it - even though it’s a sign of sexual maturity, people laser their body hair off so it will never grow again. At the same time some people have huge abundances of fake hair on their heads. The beard is somehow symptomatic of that – it’s ok now, but possibly in 20 years time will people look at it with a certain amount of distaste? The cycle of fashion may eventually push beards out of popularity again. Fashion has been extremely gendered up until now – women have had long hair, short skirts and high heels, whilst men have had big beards, working clothes and boots. Logically there’s going to be a movement in fashion towards meeting in the middle and gender fluidity.

Twice in the past where we’ve had long beard trends - the Tudor period and then again in the Victorian period. But rather than disappearing completely, the trend then changed to moustaches. So are we soon going to see the return of the moustache or perhaps some elaborately shaped whiskers? Watch this face- ...erm, space.

This chap is ready for any eventuality in his work boots, denim, plaid shirt and beard. 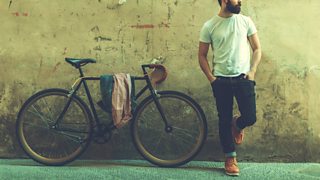 Jonathan Freedland heads down to the beard barbers to discuss why every beard isn't treated in the same way.

Beards are now commonplace in the office.