swallows prey half its own size - whole

Thought to feed on deep-water fish and squid species

This deep-sea shark doesn’t look like you’re a-typical shark. But that’s because it’s perfectly adapted to life in the abyss. So called because of the fluffy appearance of its gills, the frilled shark has six gill slits on either side of the head. It’s thought to hunt along the seabed using its senses to find its prey, and when it does it lunges at it like a snake. With over 200 pin-sharp teeth designed to trap prey, the victim stands little chance of escape. Not only that but the frilled shark can even swallow prey half its own size - whole! With new technology allowing us to go deeper for longer than ever before, we are still making discoveries about this lesser known shark – and a new species, the South African frilled shark chlamydoselachus aficana, was only discovered as late as 2009! 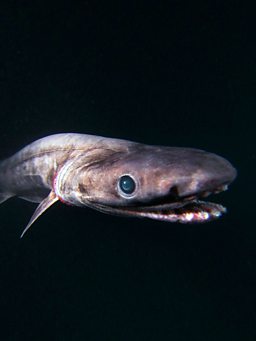