The read through for Deep Breath took place on the morning of Tuesday, 17 December, 2013. The main shoot for the episode started on Tuesday, 7 January, 2014 and finished on Tuesday, 18 February. 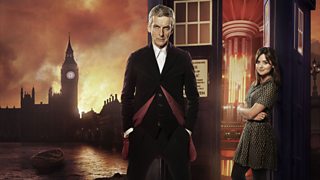 Matt Smith filmed his scene for Deep Breath on Friday, 4 October, 2013. This was the penultimate day of the shoot for The Time of the Doctor.

Madame Vastra’s comment, ‘Well then, here we go again,’ echoes the Brigadier’s remark when he witnessed the Third Doctor become the Fourth. Immediately following that regeneration the Time Lord’s old friend said exactly the same thing (minus the word ‘then’!) with his observation becoming the final line of dialogue in 1974’s Planet of the Spiders.

Clara refers to Marcus Aurelius during her heated conversation with Vastra. It’s not the first time we’ve heard her allude to this Second Century Emperor - in The Day of the Doctor she quotes him during a lesson at Coal Hill School. Find out more about Marcus Aurelius.

After entering the TARDIS towards the end of the episode, Clara says, ‘You’ve redecorated – I don’t like it!’ She could be deliberately quoting the Doctor here as she was present in The Day of the Doctor when, after glancing around the ‘new’ TARDIS interior, the Tenth Doctor commented, ‘Oh, you’ve redecorated! I don’t like it!’ The Eleventh Doctor’s chagrin at the criticism elicited a smile from her on that occasion! Many years earlier, the Second Doctor delivers a similar line in The Three Doctors and The Five Doctors and in Closing Time the Eleventh Doctor makes the same observation when he arrives at the house of Craig Owens. 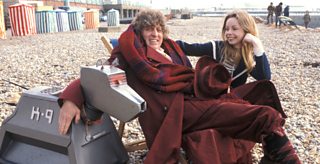 The Doctor says he needs a ‘long scarf’ before quickly dismissing the idea. This is an obvious reference to the Fourth Doctor’s scarf and it’s not the first time that shortly after a regeneration, the Doctor has felt drawn to this item of clothing. Both the Seventh Doctor and the Tenth Doctor tried on long scarves reminiscent of the one worn from The Leisure Hive to Castrovalva but in both instances, the item was swiftly rejected.

Barney (the man who shares a conversation with the Doctor about new faces) is played by Brian Miller who appeared as Dugdale in the Fifth Doctor story, Snakedance. He provided Dalek voices in Resurrection of the Daleks and Remembrance of the Daleks and also appeared in The Mad Woman in the Attic, the second story in the third series of The Sarah Jane Adventures.

Paul Kasey, credited in Deep Breath as ‘Footman’, has appeared numerous times in Doctor Who – from an Auton in 2005 to a Zygon in 2013! And if Paul Hickey looks familiar it’s possibly because he played Inspector Gregson in the online special, Vastra Investigates: A Christmas Prequel. 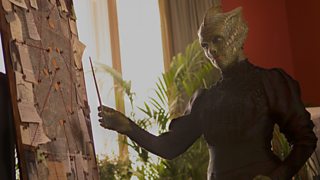 In previous stories we’ve seen a number of connections between Madame Vastra and Sherlock Holmes, with the evil Simeon even suggesting that ‘Doctor Doyle’ (Holmes’ real-life creator) was basing his sleuth on the Silurian. The Vastra-Holmes links keep coming in Deep Breath… (All the short stories noted below were written by Sir Arthur Conan Doyle).

At one point Vastra exclaims, ‘The game is afoot!’ The words are originally from Shakespeare’s Henry V but are most closely associated with Sherlock Holmes. The detective has made the declaration in numerous film and TV adaptations and in short stories including The Adventure of the Abbey Grange.

“We’ve got the Paternoster Irregulars out in force…” Sherlock Holmes had a band of raggedy youths who used to help him scour London looking for people and clues. Called the Baker Street Irregulars and led by a lad called Wiggins, they were introduced in the very first Holmes adventure - A Study in Scarlet (1887).

Jenny indicates that Vastra is investigating the Conk-Singleton forgery case. In the short story The Adventure of the Six Napoleons, Sherlock Holmes refers to this case when talking to Watson but frustratingly, no further details of the matter are revealed! 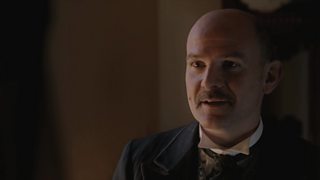