History Of The Proms

The Proms celebrated its 125th season in 2019 yet still remains true to its original aim: to present the widest range of music, performed to the highest standards, to large audiences. 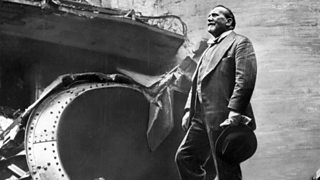 Sir Henry Wood surveys the bomb damage after an air raid destroys the earlier home of the Proms, Queen’s Hall, close by Broadcasting House in London, in 1941

The Proms and the BBC at 90

2016 saw 90 years since the BBC took over the Proms, and from the first broadcast concert of 1927, the UK has enjoyed a wide range of both new, well-known and much dearly-loved music from the festival.

This timeline made for the 90th anniversary explores the BBC’s ongoing relationship with a very British institution.

Visit the Proms performance archive, containing details of all concerts since 1895

The story of the Proms

About the Proms festival