Filming walrus in the Arctic 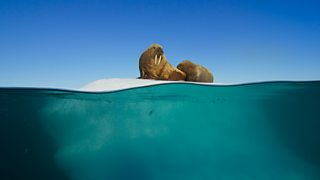 I led a team to Svalbard including assistant producer Rachel Butler and cameramen Ted Giffords, David Reichert and Dan Beecham, where we joined a local crew of expert guides and sailors and we set sail North. Our goal was to film walrus, we wanted to capture them on ice floes and had a specially built “megadome” that would allow David to capture imagery of the walrus on ice from above and below water at the same time. We also had another camera system, operated by Ted, to film walrus struggling and fighting to get onto the ice floes.

We were all set and ready to film but we needed two major things – walrus and ice. I had expected that walrus may be hard to find, but I did not expect it to be hard to find ice in the Arctic. The Arctic sea ice minimum in summer has reduced by 40% in the past 30 years (NASA data, IPCC report) and the crew were all commenting how surprisingly warm it was.

After a few more long days sailing and searching and we did begin to properly feel the cold but still we were seeing very little ice in the ocean. However, we had found a large colony of walrus comprised of hundreds of mums and their pups hauled out on dry land. The argie-bargie in the colony appeared brutal to us, particularly for the youngsters who were so small compared to the adults. But we could see why it is necessary for them to be in such close proximity – there were polar bears patrolling.

Ted and I were on a small boat with a large camera and therefore could stay a few hundred metres from the colony and still film in close detail – the stabilised zoom lens of our camera was an extraordinary tool for wildlife filming. We saw the polar bears coming close and thought that they may attack. In one of the most dramatic scenes that I witnessed for Blue Planet II, the colony stampeded into the water. It certainly seems a safer place for a mother to rest her pup would be on the floating sea ice. 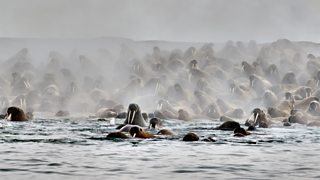 The nearby ice cliffs of Kvitoya, “White Island” provided such ice for the walrus but not in the form we were anticipating. As the name suggests the island is covered in a large ice cap, making it appear completely white. The ice cliffs would periodically calve icebergs, which would fall off, sending large chunks of ice floating out to sea. But being glacial ice and not sea ice, it seemed hard for the walrus to find a good one to haul out on, particularly the small pups. Sea ice is flat and low to the surface of the water whereas glacial ice takes on the classic form of an iceberg jutting out of the water.

There were many mums and pups trying to get their young up onto the ice. Braving the freezing sea temperatures it took David, our intrepid underwater cameraman, many days to get close enough to a walrus mum and pup on ice with his special megadome lens but he did eventually succeed in getting some astonishing split screen shots showing the walrus on top and the “iceberg” below.

Meanwhile Ted, our topside cameraman, captured graphic imagery of a mother walrus trying to force her way onto an ice floe already full of other mothers and pups. Fighting would break out as they rammed at each other with their tusks.

It was incredibly heart-wrenching to see these tiny youngsters, being pushed along by their mothers as they tried to find a suitable piece of ice. One in particular stays in my mind, where we had been following a mum and pup for a considerable time and the youngster just could not get onto the ice. Finally she made it and Ted and I let out a massive sigh of relief! 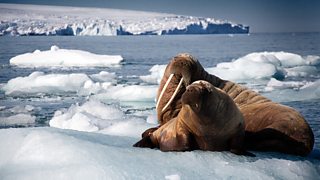 Walrus are often portrayed as thuggish sea creatures with little care for each other but the incredible intimacy we witnessed as a mother and pup eventually make it to safety on the ice is one of the most beautiful sights that I have ever seen. They tenderly 'kiss' each other with their sensitive whiskers. I couldn’t help but feel that this mum was simply letting the pup know that everything is OK. Sometimes you can spend weeks filming and following animals but it can be one moment in particular that forever stays in your mind. 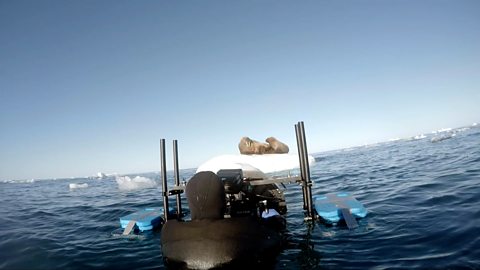 A wide-angle camera built to film both under and above the water.