Ballerina Francesca Hayward, currently the subject of much critical praise, made her debut in The Royal Ballet's Rhapsody, choreographed by Sir Frederick Ashton in 1980, aged 21. Here, seen in mesmerising slow-motion, she gives an exclusive performance of Ashton's signature sequence. 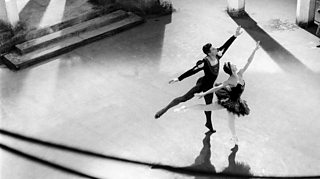 In a series of authored Ashton appreciations for "Ballet Annual" in 1960, Michael Somes added a note about this "signature step" that occurs in every Ashton ballet:

"Not many people who have watched and loved his work over many years realise that this step has become an Ashton tradition.

"Even when a new work is completed, room must somewhere be found for it in one form or another…. [It] has become dear to all of us who have had the privilege of working with Frederick Ashton. For us, it is a symbol of the reverence and the high esteem that we have for him."

Michael Soames was a principal dancer at The Royal Ballet, frequently partnering Margot Fonteyn, and assistant director of the company under Ashton from 1963-70.

The season celebrating some of Sir Frederick Ashton's finest works is at The Royal Ballet in Covent Garden, London from 18 October - 12 November 2014.